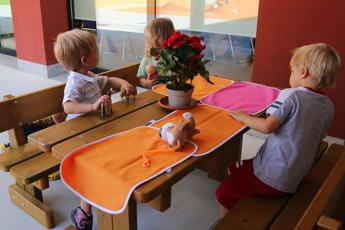 120 million euros to 4,974 local authorities to fill the gap in the supply of nursery schools

I’m 15,639 places that are missing in the nursery schools of 17 Italian regions to reach the minimum target of 33% take-up rate. To fill this gap, resources were assigned to 4,974 Municipalities through a decree issued by the Interior Ministry in agreement with the Mef, the Minister of Education, the Minister for the South and Territorial Cohesion and the Minister for Equal Opportunities and the family. The publication of the standard was made known in the Official Gazette on 29 July 2022 through a press release from the Ministry of the Interior. It was revealed by the Local Authority Studies Center (CSEL) in an elaboration for Adnkronos.


The provision concerns the Municipalities of the Regions with ordinary statute and those of Sicily and Sardinia. Trentino-Alto Adige, Friuli Venezia Giulia and Valle d’Aosta are therefore excluded. The data on which the allotment of the fund was based which, for 2022, has a endowment of 120 million euros, refer to the number of children aged between 3 and 36 months (average between the years 2017, 2018 and 2019) and the number of users of municipal nurseries and micronids under direct and outsourced management, the places authorized for private nurseries and micronids and, finally, the private and public authorized places for the spring sections. For local authorities with a service coverage level of less than 33% of the under 3 population, which represents the minimum essential level of services, the number of additional users necessary to bridge the difference between the observed service level and that objective. The result, for the regions indicated, is in fact 15,639 users.

“This gap – explains Csel – will be gradually filled with rresources, coming from the Municipal Solidarity Fund, planned for the period 2022-2027. These sums, unless the rule that governs them undergoes downward changes through amendments included in future maneuvers, are destined to increase year by year, going from 120 million euros in the current year to 175 million planned for 2023, 230 million allocated for 2024, 300 million for 2025, 450 million in 2026, up to 1.1 billion annually starting from 2027 “.

Against an average population under the age of 3 made up of 1,200,586 children in the three-year period 2017-2018-2019, the users of the nursery schools were only 312,473, i.e. 26% of the total. A figure in line with what is highlighted in the Italian Recovery and Resilience Plan which, not surprisingly, provided for, in Mission 4, an allocation of 3 billion, divided as follows: 2.4 billion for the 0-2 year age bracket and 600 millions for the 3-5 year range for nursery schools and preschools precisely to increase the rate of taking charge of these services.

“The bleak fact – warns Csel – is that, although there is such a strong and universally recognized need to increase this offer, which is also essential for the purpose of making it easier for those who have children to re-enter work, two reopening of the deadlines for arriving at a number of applications covering the entire budget foreseen by the Plan “.

“The notice to tap into the precious resources allocated for the nests by the NRP, published on 2 December 2021, was in fact – remembers Csel – one of those that has had, to date, the most troubled process. By the date of the original deadline of the announcement, February 28, requests for nests amounted to only about 1.2 out of the 2.4 available. To correct the shot, the Ministry of Education announced 3 days later that the deadlines would be reopened until March 31 and that webinars and specific support measures would be organized to support municipalities that had difficulties in drafting the requests “.

“However, even this was not enough. The requests, although significantly increased (1,676 compared to 973 the previous month, + 76%), still left 70 million euros on the table. Hence the decision to give a third chance, this time reserved for the Municipalities of the Southern Regions, with priority in Basilicata, Molise, Sicily, which had presented fewer candidates than the budget that could be assigned to them based on the resources available in the NRP “, continues Csel.

“The third could be said to be good, given that this further postponement to May 31, the deadline set by the third provision, resulted in a further 74 applications being presented, for a total of loan requests for € 81,199,333.64. A number finally sufficient to fully use, at least in theory, because it will clearly be equally important to avoid slips or delays in the implementation and reporting phases of the projects, these fundamental resources “, concludes Csel.

Where did i money from the Municipal Solidarity Fund governed by the recent inter-ministerial decree aimed precisely at strengthening the nursery services for the little ones? The elaboration of the Centro Studi Local Entities (CSEL) for Adnkronos, has highlighted how 65% of the resources (77,513,904 euros) have been assigned to Municipalities of the South, against 31 million and 613,275 euros of the 5 northern regions concerned by the provision (Emilia Romagna, Liguria, Lombardy, Piedmont and Veneto which shared 26% of the sum available) and 9% of the 4 regions of the Center which have catalysed a total of 10,872,817 euros.

Campania alone has intercepted more than 27 million, 23% of the national total. The estimated need in the 491 Campania municipalities affected by the provision is 3,579 additional users.