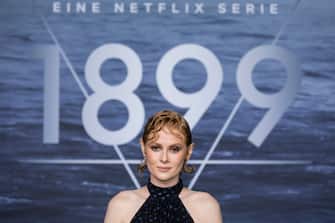 Emily Beecham plays Maura Franklin, a neurologist who is also one of the first female doctors in the whole of the UK. An independent woman, Maura faces the crossing alone. We have already seen Beecham in Hail Caesar! by the Coen Brothers and in the Disney blockbuster Cruella

1899, a new series from the creators of Dark

Andreas Pietschmann as Eyk Larsen, the ship’s captain. The German actor has already appeared in dark and in the recent last films of the series of Belle & Sebastian

Dark, the cult phrases of the series

Angel is accompanied on his journey by the fictional priest Ramiro, played by Portuguese actor José Pimentão

Dark, if the TV series had been a romantic comedy

Dark, the complete cast of the series

The mysterious Chinese Lin Yi who fascinates Olek so much has the face of the very young actress Isabella Wei, born in Hong Kong on May 1, 2004. In the photo she is with her colleague Gabby Wong who plays Yuk Je

The jovial wealthy woman Virginia is played by Rosalie Craig, a British actress best known for her work in the theatre

Gabby Wong as Yuk Je, a middle-aged woman who travels with Lin Yi and is equally mysterious

Welsh actor and musician Aneurin Barnard plays another enigmatic character who finds himself on the ship: Daniel