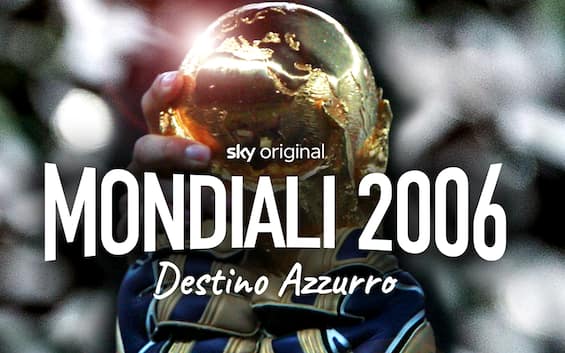 On 9 July 2006, Italy won the World Cup for the fourth time, beating the bitter rivals of France in the final. A historic victory for a team that, thanks to a great cohesion, managed to overcome all the difficulties it encountered along its path, up to the final victory.

2006 World Cup – Blue Destinydirected by Luca Severi and an idea by Alessandro Mamoli with the sports consultancy of Paolo Condò, is the Sky Original docu-series in four installmentsproduced by Wildside, a company of the Fremantle group, and Sky, exclusively on Sky Documentaries from 5 November at 5.15pm and 9.15pm, streaming only on NOW and also available on demand. The docu-series will also be broadcast on Sky Sport Uno from Monday 7 to Thursday 10 November at 11.00pm.

The story of that magical month, between June and July 2006, is relived through the hands-on voice of the coach and the players who accomplished that feat, and of international journalists and players.

THE PLOT OF EPISODES

The Azzurri are a group full of talent, but back from disappointing international experiences and now, for age reasons, at its last great ball. Also for this reason, Italy does not start with the underdogs, but easily surpasses the first round.

In the round of 16, Italy faces Guus Hiddink’s Australia, the coach who eliminated us in the last World Cup. The decisive penalty was scored by Francesco Totti, a few months after a terrible injury. Before the quarter-final match against Ukraine, the blue group was overwhelmed by the dramatic news of Gianluca Pessotto’s attempted suicide, which further cemented the group.

A group awaited by a very difficult challenge, the one with host Germany, in the basin of the Westfalenstadion. A challenge won at the end of a dramatic match, with Grosso and Del Piero’s goals in the recovery of the second overtime. In Duisburg, home to the blue retreat and a city full of Italian immigrants, the Azzurri are welcomed as heroes.

In the final, our beast awaits us: Zidane’s France. And the French champion’s header in Materazzi – the two authors of the goals in the 1 to 1 final, before the penalties – will always remain the image of those World Cups. Italy wins on penalties, sparking the celebration of an entire people.

Today, while a world curse seems to be hovering over our national football team, we want to celebrate the achievement of an unrepeatable group.