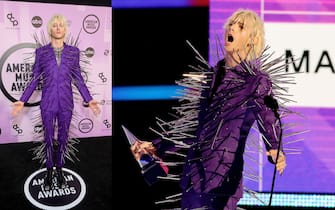 Among the worst dressed stars of 2022 is Machine Gun Kelly, loved by some as little appreciated by others for his eclectic, rebellious and always over the top style. For the American Music Awards, the alternative rock star showed up in an outfit completely covered in spikes. The concept is clear: he remains standing, even pierced by criticism

The corset was one of the key pieces of the year but it is clear that it must be worn following a precise idea of ​​style. Questionable end result for rapper Alyssa Michelle Stephens, aka Latto, at the American Music Awards

From Rihanna to Timothée Chalamet: the most stylish stars of 2022

Double trouble, they would say overseas. It is not known where to start with the looks of Sabrina Quesada and Nessa Barret, also guests of the American Music Awards in Los Angeles

A voluminous model, or with flounces, perhaps in fine fabric such as mikado or taffeta, is not enough to have a beautiful evening dress, as evidenced by the look chosen by actress and voice actress Natasha Rothwell at the last Emmy Awards. Without conviction

MTV EMA 2022, the most beautiful looks of the European Music Awards. PHOTO

In the year she competed in major industry competitions for Best Female Performer with Spencer by Pablo Larraín, Kristen Stewart almost never got a look right. This choice for the 2022 Oscars has been much criticized on social media even by his admirers

Oscars 2022: the most popular looks of the red carpet. PHOTO

Failed the prom style by Carrie Underwood at the Grammys 2022. This is what happens when you put together the dress, jewels and hairstyle of a prom queen

Grammy Awards 2022, the most beautiful dresses and looks on the red carpet. PHOTO

Billie Eilish has repeatedly reiterated that she intentionally dresses in oversized dresses that hide her silhouette to avoid the sexualization of her body and body shaming, however the look for the 2022 Oscars, all flounces, rouches and pleats, seems to have neither head nor tail

The most beautiful looks of the fashion Oscars red carpet

When you want to appear at all costs, in some cases, you end up overdoing it. So Chloe Bailey at the 2022 Oscars, with an exaggerated “slit”, nails with 3D decorations and sculpture-heeled sandals

Venice Film Festival 2022: the report cards to the looks of the stars on the red carpet

Stars love cut-out dresses, that is, dresses with cuts and portholes. Janelle Monae perhaps loved them a little too much in this look…

Almost everything is allowed at the Met Gala. Bad Bunny and Riccardo Tisci, then Burberry designers, decided to show a masculine and feminine look together on the red carpet. The result? You decide

Katie Holmes, legendary interpreter of Joey Potter from the television series Dawson’s Creek, took her role as an early 2000s teen icon seriously and went to the Jingle Ball Concert at Madison Square Garden looking straight out of those years. Needless to say she did argue

Is the red carpet serious? Certain stars of yesterday and today don’t think so, more and more determined to play down the red carpet event with ordinary style dresses. Logan Lerman, in trousers and polo shirts (very designer) for the preview of Bullet traindoes not run the risk of being attacked by fans: his is an anti-star look which, however, risks making it go completely unnoticed