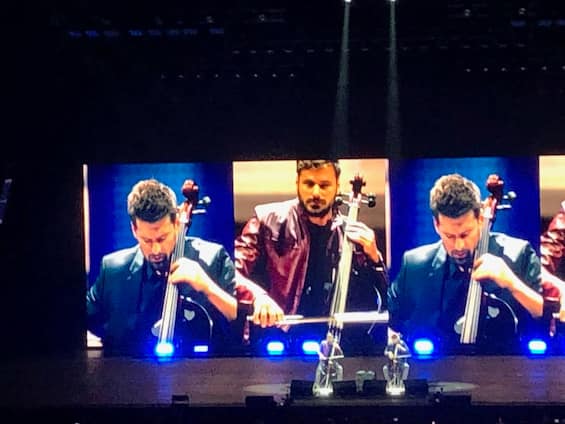 A silence as light as the winds of the East, insinuating and fascinating, welcomes the 2Cellos in a majestic Verona Arena packed with people for the last European date of their artistic history. The audience immediately turns on and confirmation from Luka Šulić And Stjepan Hauser that which is really the last show in Europe moves the emotion and despite an illusory maybe … they still promise romantic songs: “Hello beautiful, to after! “. They fry the ropes and on the other hand the streets don’t have a name and so it has to be, it’s a bit like the epic of these times, reinterpreted by U2 … Where the streets have no name. The plays of lights recall the stunts in the pool of the unforgettable Esther Williams. They are a symbol of brotherhood in the center of the stage. But it is unfathomable what you mumble in their hearts. After all, it’s goodbye and The Castel on The Hill it’s a frantic assault on a moat that overflows with memories. Looking for confirmation gigioneggiando: “The show is good?”. Then they create pathos with their limp but seductive Italian and the shots on the faces and on the hands have a mystical, excruciating and ecstatic something, which is enhanced with looks and lips that are like a Morse alphabet. And then, to be honest, the setlist does not matter much, the fascination is the daughter of a unique empathy, which even if it is exhaling its last notes, does not seem to detach itself from the story. Applause also comes from the stage, the audience is fantastic. Michael Jackson’s tears would fall… on this sweetly sad evening. Or sadly sweet.

Here it is the battery and here are the Ac / Dc of Thunderstruck, a marvel of energy, a strong signal that the magic vibrates and that takes us into a festive atmosphere … popopopo … it’s Seven Nation Army, a discharge of electricity as powerful as the breath of this ultra-millennial place. I just wonder why everyone remains composed in their place: this is an anarchist version and must destabilize. Psychedelic, the Prodigy’s version of Voodoo People is lysergic. They promise rock’n’roll and are up to their word. On the other hand, attitude is enough to spread it in the air as if it came out of a censer. Finally someone puts his cell phone in his pocket and gets up to dance. This is rock’n’roll, energy and life… so there will always be someone, at a spit from you, who prefers to archive a video that they won’t watch anymore from the day after tomorrow and will post it for you too. Less video and more rock, this is a lesson made in 2Cellos. Satisfaction is in the audience and this time, I swear, I (really) get satisfaction and has a very long tail, demonic, heavenly and sonorous, with the audience invited to duet (louder) with them. By the way, the Rolling Stones song for the registry is from 1965. The time of a breath and I’m back in black accompanied by a graphic that evokes Keith Haring: it seems to be sucked into the images. The ending is a vibration, it is a long breath, a gasp of poetry. 2Cellos have stopped riding rock! Halleluja.