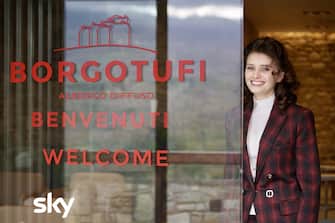 Antonella is the young director of Borgotufi, a widespread hotel in Castel del Giudice, in the province of Isernia.

4 Hotel, the winner in Ischia is Casa Celestino. The interview

Borgotufi was born from a very ambitious project of the municipality of Castel Del Giudice who wanted to give new life to the small town now in a state of neglect.

4 Hotels between Marche and Romagna: the third episode in 18 photos

The structure consists of a main building with all the services for guests, including a spa, and 30 houses / rooms obtained from old stables and houses scattered around the village.

4 Hotels in Rome: the second episode in 15 photos

The hoteliers in challenge in Molise: Emanuela, Teresa, Luca and Antonella.

4 Hotel, the winner in Rome is Condominio Monti: the interview

4 Hotel 2022 restarts from Sicily: the first episode in 15 photos

Antica Dimora Isernia is located in three buildings in the historic center for a total of 9 rooms but with a common reception next to one of the buildings.

Luca is a real fanatic of the classic style and has furnished all the rooms of his structure in that way.

Emanuela is the explosive and bubbly artist who owns the Cannavina Palacethe ducal palace in the historic center of Campobasso.

Each room has a story to tell: from the one where Prince Emanuele spent the night to the room where the first flag of independence was placed.

Alongside the historical elements of the Palazzo Emanuela wanted to collect modern works by local and international artists and also made by her, all perfectly harmonized.

Teresa manages, together with her husband, theWhite olive tree, a bed and breakfast immersed in the Molise countryside, a few km from the sea of ​​Termoli.

L’Ulivo bianco has only 4 rooms finely renovated and furnished in a shabby chic style and a beautiful swimming pool.

The name of the B&B comes from a very rare type of olive tree found in the area, and the predominant color is white.

At the end of the stay, Bruno Barbieri and the hoteliers in challenge are ready to give their opinions.

The hoteliers in challenge in the fifth episode of 4 Hotel in Molise.