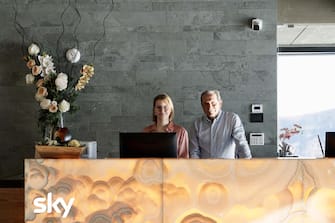 Philip is the owner of the King of the Alps a 4-star hotel located at 2000 meters right on the ski slopes of La Thuile.

Bruno Barbieri 4 Hotel, in the Aosta Valley for the fourth episode

An entrepreneur from the south in love with the mountains, in 2004 Filippo bought this ancient barracks from 1924 used by the border guards from the region and renovated it into a 4-star hotel.

4 Hotel, the winner in Bologna is Casa Isolani. The interview

The King of the Alps, at the time, was the first 4-star hotel in La Thuile that had a small spa and 12 rooms.

4 Hotel in Bologna, the third episode in 15 photos

Shortly after, Filippo built another very modern building reaching 26 rooms and expanding the panoramic spa that can also be used by external guests.

Bruno Barbieri 4 Hotel, in Bologna for the third episode

Fabio is the general manager of “Le Massif, a 5-star luxury hotel with 80 rooms a few steps from the center of Courmayeur and the ski slopes.

4 Hotels, the winner in Calabria is Palazzo Mottola. The interview

For Fabio, being a 5-star means knowing how to fulfill any customer request.

4 Hotel in Calabria the second episode in 15 photos

The structure opened in 2018 has a clientele looking for a luxury mountain resort with exclusive services.

4 Hotel, the winner of Molise is Palazzo Cannavina. The interview

The very young staff is very professional and Fabio has no doubts, his hotel is among the top 10 hotels in all of northern Italy. In the photo the swimming pool and the hotel spa.

4 Hotel in Molise, the first episode in 15 photos

Nicoletta is the owner together with her husband of the Bergman Mountain Hotela 12-room “ski-in ski-out” facility located directly on the slopes of Cervinia.

4 Hotels, the new season kicks off. Bruno Barbieri in Molise

Originally from Santa Margherita Ligure, Nicoletta has now lived in Cervinia for more than 20 years.

The structure did not exist and therefore it was completely built by them with a mountain style but very modern.

The rooms are not overly large but all have a panoramic balcony. The spa also overlooks the slopes.

Luigi is the owner along with his family of Au Charmant Petit Lac a 5 star Eco Hotel in Champoluc.

The Hotel is located near the center of the country but in an area completely surrounded by greenery (the hotel is surrounded by a 15,000m park).

The competing hoteliers of the Aosta Valley.

Bruno Barbieri in his room a Au Charmant Petit Lac. The strong point of the structure, in addition to the beauty of its design, is the utmost attention to the ecological theme.