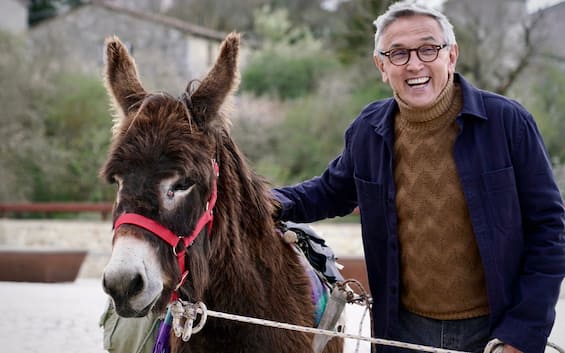 The journey of Bruno Barbieri 4 hotels restarts with four new stages: from Sunday 4th September, on Sky and streaming on NOW, here are other challenges between hoteliers from all over Italy ready to get back into the game to conquer the taste of the upright and very strict hotelier expert. After the first summer episodes, Barbieri referees 4 new races of the Sky Original production created by Banijay Italia which competes the hotels of some of the most fascinating places on the Peninsula, representing the most important business card possible for anyone who has to travel far and wide. wide in our country.

For the next few weeks, the 4 Hotel navigator will sail to Calabria, Bologna and Valle d’Aosta. In the first episode, however, expected for Sunday 4 September at 9.15 pm on Sky Uno, always available on demand, visible on Sky Go and streaming on NOW, Bruno goes to the discovery of Molise: the journey of Bruno Barbieri 4 Hotel is ready to show a little known but surprising territory, full of ideas and all to be discovered. Between historic buildings, widespread hotels and country houses a stone’s throw from the sea, the Molise episode will show how all tastes are fully satisfied. The hoteliers in the race are:

Antonella, young director of Borgotufi – a widespread hotel in Castel del Giudice (Isernia) – a very determined girl who pays attention to details. She started three years ago as a simple receptionist but in a few years she became the director of the entire structure. Borgotufi was born from a very ambitious project of the municipality of Castel Del Giudice who wanted to give new life to the small town now in a state of neglect. The structure consists of a main building with all the services for guests, including a spa, and 30 houses / rooms obtained from old stables and houses scattered around the village; the 30 units are all in stone, some with modern design and others with more classic mountain furniture, all perfectly integrated into the place;

Emanuela, sparkling artist who owns Palazzo Cannavina, the ducal palace in the historic center of Campobasso. It has 7 rooms with design furniture perfectly integrated into the ancient structure of the historic building; each room has a story to tell: from the one in which you stayed the night Prince Emanuele to the room where the first flag of independence was placed. Alongside the historical elements of the building, Emanuela wanted to collect modern works by local and international artists and also made by her, all perfectly harmonized: for her, in fact, in the hotels the harmony of the furniture is an essential factor;

Teresa who manages, together with her husband, the white olive tree, a bed and breakfast immersed in the Molise countryside a few kilometers from the sea of ​​Termoli. It has only 4 rooms finely renovated and furnished in a shabby chic style, and a beautiful swimming pool. She likes to travel and from every trip she brings home something that she uses to furnish the structure. The name of the property comes from a very rare type of olive tree found in the area.

Even in the four new episodes, the competing hotels, of different price ranges or categories, will compete for the title by focusing on their own charm and peculiarities, keeping unchanged the success mechanism that has made this show a cult. It will be a tour to discover new trends in hôtellerie but also the different ways of understanding welcome and hospitality according to the different areas of Italy, between the richness of the territory and the activities planned by each hotelier to make the experience unforgettable.

Colleagues and opponents at the same time, led by the exacting and severe hôtellerie expert Bruno Barbieri, the competitors will spend a day and a night in each other’s hotels. Once you have checked in, for each hotel the starred Chef will personally experience the welcome, style, cleanliness, hotel services and more generally the hospitality of each hotelier. At breakfast, after the check-out, the competitors will judge each other. For each, a vote from 0 to 10 out of 5 categories: location, room, breakfast, services, price.

The focus for Barbieri will remain in the enhancement of the eco-sustainable choices made by hoteliers: every time he will find particular attention to these issues – from the furniture of the rooms chosen in respect of the environment to the use of glasses, dishes and courtesy kit in materials that are other than plastic – will be able to affix its “green seal” to the structure. After many battles won by Barbieri during the previous trips of 4 Hotels – his hostility towards the runner is famous, his passion for toppers is iconic – the new commitment will be in demonstrating how it is possible, thanks also to small precautions, to combine hospitality and attention to environmental sustainability.

World traveler, with his distinguished, sophisticated and elegant style, Bruno is the conductor, guide, observer and above all judge of the race. For work, but also for passion, the Chef has traveled a lot, to the point of becoming a true expert in hotel hospitality: he knows all the secrets, as well as the different habits depending on the latitudes. During the episodes, all this experience will allow him – showing off his more ironic, pungent and rigorous side – to tell the challenge by putting hoteliers in front of small and large unforeseen events to evaluate their problem solving skills and attention to the customer.

With his votes, at the end of each episode he will be able to confirm or revolutionize the verdict resulting from the votes of the 4 protagonists of the episode. Only one of the competing hoteliers will thus be awarded an economic contribution to be reinvested in their company.

BRUNO BARBIERI 4 HOTEL is a Sky Original production made by Banijay Italia.