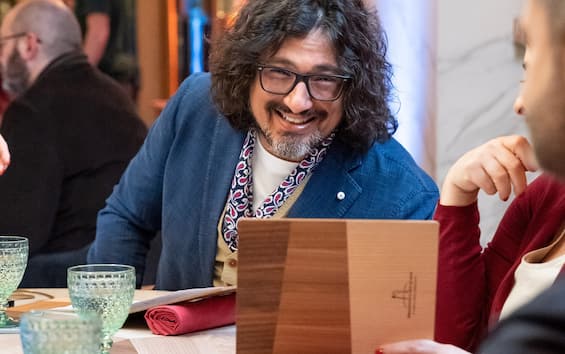 In Friuli-Venezia Giulia, halfway between Venice and Trieste, there is a city suspended between the sea and the land: it is Degreethe “island of the sun”, and this splendid center of Veneto is the stage for the new challenge of “Alessandro Borghese 4 Restaurants”, The show – Sky Original production made by Banijay Italia – coming soon Sunday 29 May on Sky and streaming on NOW.

The iconic chef’s van with tinted windows Alessandro Borghese park in Grado, a delightful city with long beaches loved by tourists, a historic center divided into calli and campielli just like nearby Venice, a lagoon that stretches for 90 km with many islets and fishing valleys. Behind it has 1600 years of history but was connected to the mainland only in 1936: previously it could only be reached by boat. Its strategic position, the favorable climate – with winds that blow in such a way as to discourage rain in any season – and the lagoon rich in typical fish and characteristic herbs have made it attractive, over the centuries, to various peoples: first the ancients Romans built the historic center, then the Lombards populated the islets of the lagoon; the Venetians, among other things, influenced the kitchen; the Austrians, in 1800, made it the seaside destination of today. The people of Grado are therefore the result of this extraordinary mix of influences, but always managing to remain faithful to themselves and handing down a precise tradition.

There lagoon cuisine – protagonist of this episode of “Alessandro Borghese 4 Restaurants“, arriving Sunday 29 May at 9.15 pm on Sky Uno, always available on demand, visible on Sky Go and streaming on NOW – was born in the casoni, the ancient fishermen’s houses, with poor recipes which, over the years, have become the flagship of the city: the boreto alla gradese with sea bass and mullet, the sardelle in savor (homonymous but very different from the Venetian ones), the cappelunghe with strictly white polenta or the fresh pasta with the spider crab, a typically lagoon crab.

Also in this case, together with Alessandro Borghese four restaurateurs, each eager to prove that they are the best, will be competing to obtain the coveted, beloved and unmistakable “ten”By the chef: the four will compete for the title of best lagoon cuisine restaurant in Grado. They will compete Michela with his At Pontil De ‘Tripoli, Christian and his Trattoria Ai Ciodi, Well and the Alla Diga Restaurant, Danilo with her At the Old Marina. As always, four restaurateurs will compete to determine who among them is the best in a certain category; each restaurateur invites the other three who, accompanied by chef Borghese, comment and vote with a score from 0 to 10 location, menu, service, I count of the restaurant that hosts them and the category Specialwhich changes from episode to episode: all four challengers, in fact, will have to compete on the same plate, the protagonist of that episode, so as to make the competition between them ever more direct and intense, with no holds barred.

This week, the Special category that restaurateurs will have to deal with is the boreto alla gradese (or as they say, alla graisana). The lagoon recipe par excellence, which was born as a single dish in the fishermen’s huts of Grado, is traditionally served as a main course and is prepared with lagoon fish cut into slices (especially mullets, sea bass and turbot), oil, garlic, vinegar and lots of pepper, accompanied with white polenta, but every family from Grado (and obviously every restaurateur) has its own trick to make it truly special.

After Grado, the journey to the Peninsula of “Alessandro Borghese 4 Restaurants“- every Sunday in prime time on Sky Uno, always available on demand, visible on Sky Go and streaming on NOW – it will then continue in some of the most fascinating and characteristic places in Italy: Molise, Verona, Gubbio (Perugia), Milan.

Up for grabs for the winner of each episode, the highly coveted title of best restaurant and an economic contribution to invest in your business.

As per tradition, each meal is preceded by the scrupulous inspection by chef Borghese of the restaurant kitchen. Everything is observed down to the smallest detail, for an analysis that then continues even during the meal, focusing on the dining room staff, put to the test on hospitality, table service, description of the dish and wine. Only at the end do we discover the judgment of chef Borghese, who with his votes can confirm or overturn the entire ranking.

All restaurants participating in the program are identifiable through a “stamp” 4 RESTAURANTS exposed to the outside, a network of premises tested by those in the know: the restaurateurs themselves.

THE RESTAURANTS OF THE EPISODE OF GRADO

At Pontil De ‘Tripoli: it is the restaurant suspended over the sea of ​​the Michela lagoon, which takes care of the dining room and «conceptually also of the kitchen, because I study the menu with my chef Tommaso“. His style, in the dining room, is evident: “During the service I always wear long clothes. The ladies of Grado are happy: they finally have a place to dress elegantly“. After studying criminology, Michela realized that catering was the right way for her. She proposes a lagoon but creative cuisine, because she wants to give an alternative: therefore, for example, the boreto gradese is a first course with linguine, while the cuttlefish are accompanied by bacon and goat cheese. Michela on the one hand feels a visceral passion for the lagoon, on the other she has some problems with the people of Grado, often feeling judged by them. The restaurant is architecturally very particular: it was built on pylons directly on the sea of ​​the lagoon, surrounded by floating scaffolding where the fishing boats dock, and with all green building materials: «Swithout any harmful impact on the environment»She guarantees. The interior reflects Michela’s particular taste: it looks like a wooden galleon, elegant and well-finished, with a mise-en-place that is always different and colorful and contemporary works of art by artists who are friends of hers.

Trattoria Ai Ciodi: to get to the Trattoria Ai Ciodi di Cristiano you have to get on a boat and cross the lagoon to its westernmost part, the island of Anfora, a territory of a few hundred meters where his family created a restaurant in the seventies . “We are known in Grado as the Ciodi because when we put something in our head we are like a nail, we never give up. This island is our kingdom“, Explains Cristiano, according to which”the lagoon is a way of life“. After experiences in other places, even famous ones, he felt the call of home and is now the chef of the family restaurant. He serves a typically Gradese cuisine in a rustic setting, immersed in the colors and smells of the lagoon landscape: boreto, sardelle in savor, cappelunghe with polenta; in recent years, he has also started using algae. Rough and concrete, Cristiano is also a fisherman, and he knows everything about Grado and his traditions. The island on which the restaurant stands, Anfora, was in ancient times the border between Italy and Austria; beyond the pier where the boats dock, the restaurant’s dehors immediately opens, which extends almost completely outside: long tables with wooden benches, umbrellas, the lagoon sea a few steps away and the open kitchen. Where once stood the house of Cristiano’s grandparents now there is the bar part. Many Austro-Hungarian relics hang on the walls, including a photo of Kaiser Franz Joseph.

Alla Diga Restaurant: located in the city, on the panoramic promenade of Grado. Ben, German by birth, married a Gradese daughter of the owner of the historic hotel linked to the restaurant: they met while he was studying finance in Vienna, and he decided to follow her to rejuvenate and relaunch the restaurant. For four years he has been taking care of the dining room and the choice of the menu, proposing seasonal dishes that combine the flavors of the lagoon with other more contemporary ones: “We are in a strategic point of passage, we have to please everyone, tourists and people of Grado», Says Ben, and therefore there are both” schille “lagoon shrimps with white polenta, and smoked salmon with citrus fruits and gin … but also the Grand Imperial fry«as liked by the Habsburg royal family, who came here at the end of the 19th century“, He says. The restaurant is located right on the seafront of Grado, on a terrace on the ground floor which during the day serves for breakfast in the family hotel while in the evening it becomes a restaurant with different tables and seats. The style is ancient, from a retro holiday, but with attention to detail.

At the Old Marina: in the historic center of the city, nestled between calli and campielli, is Danilo’s trattoria, nicknamed Brontolo by all, as he is known by his employees and friends: “I don’t have a nice character: nothing ever suits me, I want things to be done as I sayHe admits. Danilo is the chef and serves almost exclusively lagoon cuisine such as, for example, a triptych of sardines, cuttlefish and sea bass in savor or gnocchi with cockles; the other part of the menu has a more touristy proposal, with lasagna and pasta with meat sauce. The restaurant is located on the ground floor of an ancient building, a former private house converted into a restaurant. The décor is rustic and nautical (there are anchors, nets, shells) and for this reason Danilo has chosen to keep the historical name, Vecchia Marina in fact. The restaurant has the plus of having a first terrace under a 102-year-old vine and a second in a recess in the calle.

ALESSANDRO BORGHESE 4 RISTORANTI is every Sunday in prime time on Sky Uno and streaming on NOW, always available on demand and visible on Sky Go.