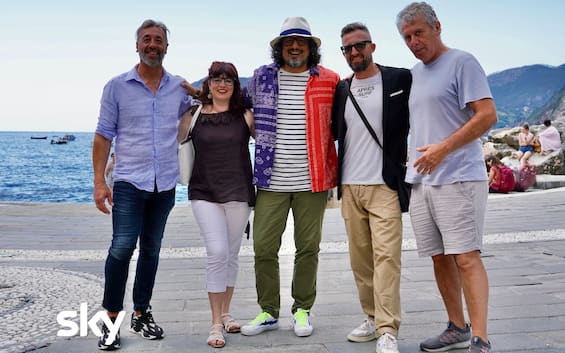 Eighteen kilometers of pure natural wonder, a truly dreamlike place, visited every year by thousands of tourists from all over the world: these are the Five lands the stupendous location of the new challenge of Alessandro Borghese 4 Restaurantsrefereed by Chef Alessandro Borghese, arriving Sunday 8 January on Sky and streaming on NOW. The challenge of searching for best restaurant in the Cinque Terre National Park takes place in a magical place where the Apennine mountains lead directly into the Ligurian Sea.

The National Park, established in 1999, is the smallest in Italy but also the most suggestive, it includes five villages perched on the rocky ridges, formerly houses of farmers and fishermen, rich in history, art and nature: Riomaggiore, Manarola, Corniglia, Vernazza and Monterosso, which in recent years have become a privileged destination for tourism.

In a place that conveys nature and history but also tradition and strong tourist waves, there are many restaurateurs who try to find the key to becoming unique and capturing their customers. Strong dishes of the local tradition are anchovies And pesto, omnipresent ingredients throughout the Cinque Terre. Competing in this episode – expected to premiere for Sunday 8 January in prime time on Sky Uno and streaming on NOW, always available on demand and visible on Sky Go – there are “From Luke” Luca’s, “Rio Bistroby Manuel,From Ely” by Eliana and “The Caselloby Francis.

The basic rules of Alessandro Borghese 4 Restaurants remain the same: four restaurateurs with something in common, each eager to prove that they are the best in a given category, are competing to obtain the coveted, much-loved and unmistakable “ten” of the chef . Each restaurateur invites the other three who, accompanied by Borghese, comment and vote with a score from 0 to 10 on the location, menu, service, bill of the restaurant hosting them and the Special category, which changes from episode to episode: all four challengers, in fact, will have to compete on the same dish, the protagonist of that episode, so as to make the competition between them ever more direct and intense, with no holds barred.

In this episode, the special category is the main ingredient of the local cuisine, the anchovy: the most famous is that of Monterosso, but in reality every village has its own anchovy and is keen to defend it.

As per tradition, this meal too will be preceded by chef Borghese’s scrupulous inspection of the restaurant’s kitchen. Everything will be observed down to the smallest detail, for an analysis that will then continue during the meal, focusing on the dining room staff, put to the test on reception, table service, description of the dish and the wine. Only at the end will chef Borghese’s judgment be discovered, and with his votes he can confirm or overturn the entire ranking.

Up for grabs for the winner of the episode, the coveted title of best restaurant and an economic contribution to invest in his business.

Chef Borghese’s journey will continue in some of the most fascinating and characteristic places in Italy such as, among others, Naples and Ortigia (Syracuse).

All the restaurants participating in the program are identifiable by a 4 RESTAURANTS “sticker” displayed outside, a network of establishments tested by those in the know: the restaurateurs themselves.

“Da Luca”: a stone’s throw from the small port of Vernazza is the restaurant owned, obviously, by Luca. His family, fishermen, is one of the oldest in the village, according to him they have lived there for «1000 years». Today Luca has temporarily set aside the sea because he prefers walking in the mountains and taking care of his garden: he grows various aromatic herbs. Luca takes care of the dining room but never loses sight of the kitchen. He offers traditional Ligurian dishes, from trofie with pesto to stuffed anchovies, preferring a short menu: «We serve a great many tourists who come and go – He says – And they don’t want to waste time reading endless menus!». The “Da Luca” restaurant is located in the cellars of an ancient building directly connected to the fortress of Vernazza, and from its dehors you can admire the whole village: it is located in the center of the small port and, although it is not too sophisticated, it offers a truly suggestive. The stone interior is very rustic and suggestive and is enriched by a painting that reproduces the landscape of the village.

“Rio Bistrot”, overlooking the main bay of Riomaggiore, is owned by Manuel and two other partners. According to him, his restaurant was a real forerunner in the gastronomic panorama of the Cinque Terre: «We have eliminated any “tourism” from the menu – he says – proposing a gourmet and refined cuisine». On the menu, therefore, there are dishes such as turmeric lasagnette with prawn essence or the palette of steamed shellfish which at the beginning. Manuel takes care of the dining room and, despite the goals he has achieved, he always wants to do better and keep his feet on the ground. He is very attached to his personal self who lives like a big family and who always defends with drawn sword. In love with the Cinque Terre, he doesn’t feel the competition with restaurateurs from other countries. “Rio Bistrot” is located in an ancient building with a panoramic stone terrace overlooking the other restaurants, and a refined and gourmet interior with a few well-kept seats and contemporary works of art on the walls.

In a carruggio in Monterosso, the most populous of the Cinque Terre, is the restaurant “Da Ely” by Eliana, owner and chef of the place for 25 years: she started when she was 18 and has never stopped, also thanks to a resolute character. She works with her husband, who takes care of the dining room, and offers traditional cuisine: her dishes «they are the essence of the Cinque Terre»: spaghetti with seafood, homemade pesto (with a secret ingredient he doesn’t want to reveal) and anchovies served in various ways. The “Da Ely” restaurant has a narrow and long outdoor area, while inside it is large and spacious; it is obtained from a former stable, with exposed beams and arches from the 1600s. The atmosphere is rustic, with some refined touches in the mise-en-place: the wooden napkin rings and the lamps, for example, are created directly by Eliana.

“Il Casello” by Francesco, on the Monterosso seafront, is located in a former railway station. Called “Bacchus” by all, he traveled the world before becoming a restaurateur and now divides his time between Texas, where his American wife lives with their daughters, and the Cinque Terre: this is why he proposes a cuisine based on family recipes, those of the mother and aunt, almost exclusively fish and with great attention to regional products, without too much processing. He is divided between the kitchen and the dining room, he is a fan of organization and considers himself a “nonconformist”: «I’d rather not charge a customer than leave unsatisfied» he declares. “Il Casello” is a building from 1850, with an internal garden overlooking the sea and a panoramic dehors directly overhanging the waves; the entrance floor was recovered from the old village church. The interior is very rustic, in perfect tavern style.

ALESSANDRO BORGHESE 4 RISTORANTI is every Sunday in prime time on Sky Uno and in streaming on NOW, always available on demand and visible on Sky Go.