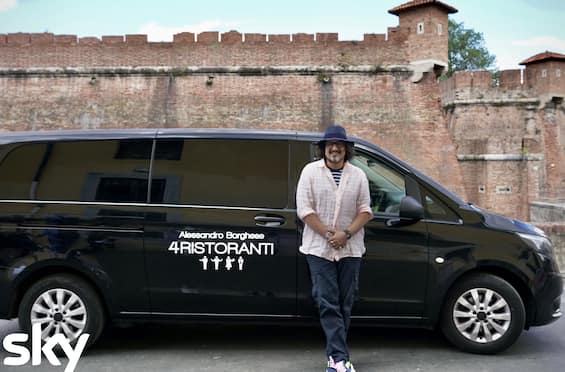 A new iconic challenge awaits Chef Alessandro Borghese, that this week, for the new episode of Alessandro Borghese 4 Restaurants – Sunday 18 December on Sky and streaming on NOW – fly to Edinburgh looking for the best Italian restaurant in the Scottish capital. Characteristic and full of history, including spiers, castles, art and historic districts, there are many Italians in Edinburgh: the tricolor community, in fact, is the third largest community in Scotland, and 37% is made up of people who live right in the city. And obviously these numbers mean that there are countless Italian restaurants in Edinburgh: between historic establishments faithful to tradition and others that are more innovative because created by the new generation, what unites them is the Italian spirit of the menus, which range from lasagne alla bolognese to meatballs, from carbonara to porchetta. A real corner of Italy thousands of kilometers from our borders.

But the experience can become even more unique in the Christmas period: when the city becomes very colorful and fascinating for the Christmas atmosphere, even Italian restaurants adapt to transport the Italian-Scottish people to the Peninsula with the most typical flavors and dishes of our holidays. And so Alessandro Borghese parks his van with tinted windows for this week to board the classic Scottish taxi, and goes in search of the best Italian restaurant in Edinburghin an evocative episode full of Christmas colors and traditions.

Competing in this episode – expected to premiere for Sunday 18 December in prime time on Sky Uno and streaming on NOW, always available on demand and visible on Sky Go – there are “Giuliano’s Restaurant” by Julian, “Terra Marique” by Ilaria, “Locanda De Giusti” by Rosario and “Sparkling Proseccheriaby Pasquale

Also unchanged in Scottish land the rules at the base of Alessandro Borghese 4 Restaurants: four restaurateurs with something in common, each eager to prove that they are the best in a certain category, are competing to obtain the coveted, beloved and unmistakable “tenby the chef. Each restaurateur invites the other three who, accompanied by Borghese, comment and vote with a score from 0 to 10 location, menu, service, I count of the restaurant that hosts them and the category Specialwhich changes from episode to episode: all four challengers, in fact, will have to compete on the same dish, the protagonist of that episode, so as to make the competition between them ever more direct and intense, with no holds barred.

In this episode, the special category is the best known and loved among Italian desserts, the tiramisu.

As per tradition, this meal too will be preceded by the scrupulous inspection by chef Borghese of the restaurant kitchen. Everything will be observed down to the smallest detail, for an analysis that will then continue during the meal, focusing on the dining room staff, put to the test on reception, table service, description of the dish and the wine. Only at the end will chef Borghese’s judgment be discovered, and with his votes he can confirm or overturn the entire ranking.

Up for grabs for the winner of the episode, the coveted title of best restaurant and an economic contribution to invest in your business. Chef Borghese’s journey will then return to Italy, starting from Sunday 1 January 2023, and will continue in some of the most fascinating and characteristic places such as, among others, Naples, Ortygia (Syracuse), the Five lands. All restaurants participating in the program are identifiable through a “sticker” 4 RESTAURANTS exposed outside, a network of venues tested by those in the know: the restaurateurs themselves.

THE RESTAURANTS IN THE COMPETITION IN THE EDINBURGH EPISODE

“Giuliano’s Restaurant”: Giuliano is the owner, together with his friend and partner Angelo, of the restaurant that bears his name, opened in 1990. Giuliano is from the Marches and moved to Edinburgh in 1981, but since 1975 he often frequented it because he worked little out of town. Giuliano’s role in the restaurant is contact with the customer, he likes being with his guests and this has also earned him a certain reputation in the city. Although he is not a chef, he is a great cooking enthusiast and the last word on the choice of dishes on his menu belongs to him. Giuliano is an outspoken man and as a boss he admits that he is not very rigid, indeed he defines himself as «without putting much effort». At “Giuliano’s” the cuisine is typically Italian, they eat Italian classics such as ragù alla bolognese, but they tend to use only Scottish meat and fish. There is also no shortage of dishes invented with typically Italian ingredients which, however, meet the demands of Scottish customers (even if customers often make requests that are far from the original Italian recipes, such as veal parmigiana). “Giuliano’s Restaurant” is located opposite the Edinburgh Theater, an area that years ago was the place where Italian immigrants settled. The place is the classic Italian restaurant of the 90s, in a retro style, which nonetheless offers a warm and welcoming atmosphere.

“Terra Marique”: Ilaria is the owner and floor manager of the restaurant, which has been open since October 2019 together with her partner and friend Fabrizio. Ilaria, originally from Vieste, moved to Edinburgh at the age of just 20: for her it was «the wisest and most important decision of my life». After ten years of apprenticeship he decided to embark on his own path with the “Terra Marique”. Ilaria is a very enterprising and determined girl, very proud of her place. Ilaria did not want to recreate the classic Italian restaurant abroad with pasta and pizza dishes, but she proposes Mediterranean cuisine, with a restricted and refined menu. Ilaria loves going to other restaurants, especially the Italian ones, she is very attentive to the service and behavior of the dining room staff. The restaurant is located in the center of Edinburgh, at the foot of the Castle; the restaurant is rather restrained and intimate, with a very refined, informal but elegant atmosphere, and Ilaria and Fabrizio have instead wanted to create a more youthful and “fresh” environment.

“Locanda De Giusti”: chef and owner, Rosario has lived in Edinburgh for 36 years, ever since he moved there permanently when he was very young, because «in Naples things were not going very well». After opening his first restaurant in 2000, in 2009, due to the financial crisis, he lost everything; thus, as a revenge, in 2014 he took over the “Locanda De Gusti”. Rosario defines his cuisine as «a colorful cuisine, I wanted to bring Naples to Edinburgh, going against the tide like a salmon». According to him, tourist cuisine made with cream and the like is the one that earns the most money in Edinburgh, but despite this, the proposal of his restaurant tries to reflect traditional Italian cuisine in the best possible way. As good as he is in Edinburgh, Rosario himself says that he misses his Naples. He is very proud to be one of the few Italians in the city to offer the true flavors of our country. The “Locanda De Gusti” is located in the area just outside the old city walls, in the eastern part of the Castle, in what was once part of a Scottish agricultural estate. It is a well-kept place with 28 seats, with a simple mise-en-place but always with an eye for detail.

“Sparkling Proseccheria”: Pasquale, originally from Gragnano, has lived in Edinburgh for 45 years. He has a rich and adventurous history, in his life he has always had to get by and struggle between study and work, he has abandoned his native land to escape from the precarious economic situation in search of a better life. He married a girl from Edinburgh and then decided to find success in Scotland. After various businesses opened and subsequently closed, he decided to get back into the restaurant business by opening the “Frizzante Proseccheria” in 2012. Here Pasquale is the landlord, he takes care of the reception and the dining room. Giuliano is outspoken and likeable but very demanding at work, he doesn’t send them to anyone. The kitchen of his restaurant is «half Italian, half invented»: Pasquale in fact tries to use Italian ingredients that also satisfy the Scottish palate. The restaurant is located a few steps away from Princes Street, one of Edinburgh’s main arteries as well as a shopping street, the beating heart of the city: the “Frizzante Proseccheria” is in a strategic area, very close to several theatres, and thus becomes the favorite restaurant who is preparing for an evening at the theatre.

ALESSANDRO BORGHESE 4 RISTORANTI is every Sunday in prime time on Sky Uno and in streaming on NOW, always available on demand and visible on Sky Go.