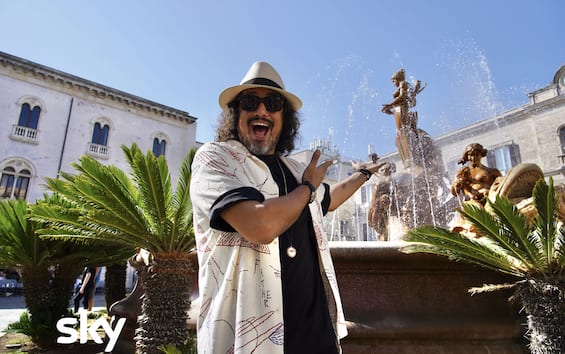 This week the van of chef Borghese arrives on the eastern coast of Sicily, in an area that has a thousand-year-old beating heart, to locate the best restaurant between innovation and tradition of the island of Ortigiain Syracuse, the only city in the world to have its historic center on an island.

In the new appointment of Alessandro Borghese 4 Restaurants (THE SPECIAL), you arrive at U’ Scogghiu, as the area of ​​Ortigia is called in the local dialect, a stupendous interweaving of streets, squares and alleyways overlooking the Ionian Sea and leading to Ponte Umbertide, the only link between the island and the rest of the city of Syracuse. It is the oldest part of the city, inhabited since the Bronze Age and then disputed by Greeks, Phoenicians, Romans, Arabs, Byzantines, Spaniards, Bourbons, Austrians: obviously each of these populations has left its mark on this corner of the world , and even today, exploring the streets of Ortigia, traces dating back to these populations can be traced. Between the Castello Maniace wanted by Frederick II in 1200, the temple of Apollo from the Greek era, the Baroque cathedral, the noble palaces of the eighteenth century and the Arethusa spring, where the papyrus grows spontaneously, but also the courtyards, churches and convents, the historic center of Syracuse is a mosaic of styles and cultures. The same goes, of course, for the table: tradition is very present in the inns, bistros and elegant restaurants in the area – between fried pasta Syracuse-style or Moorish sauce and pupetti i mucco (fish balls), between the caponata and the matalotta (fish soup) – but it is often offered to customers in a modern, reworked key.

Alessandro Borghese arrives in Ortigia to find out, through 4 local restaurateurs, how they managed to find a balance between innovation and tradition: in the episode of the Sky Original show made by Banijay Italia of Sunday 22 January in prime time on Sky Uno and streaming on NOW, always available on demand and visible on Sky Goin the race there are “Alevante Restaurant” by Igor, “Macallè Sicilian Bistrot“by Maurice,”Piero’s Tavernby Angela andManiace innby Mirko.

“Alevante Restaurant” by Igor, owner and executive chef of this restaurant located in the Giudecca district, one of the oldest districts of Ortigia and also the last to be re-evaluated, outside the tourist circle. Igor, since he was a child, has had a passion: «Take things apart to understand how they work», he calls it, a principle that he now applies in the kitchen, where he creates, destroys and recreates with particular combinations. This nature has pushed him towards a fusion cuisine with a very specific identity: «Innovation, research and mixing: if you know how to do it and you have the courage – He says – you can join elements that, even if they seem distant, come out excellent». The dishes it offers are a meeting point between different territories and cultures bordering the Mediterranean: Sicily, Puglia, Lazio and even North Africa, due to its geographical and historical proximity to the island. Originally from Salento, Igor initially landed in Ortigia to take part in a regatta, but once here he fell in love with it; he is convinced that he is a gourmet alternative that satisfies the sophisticated palates of tourists and locals in a friendly and unique environment. The strong point of “Alevante Restaurant” is certainly the outdoor area, set up with blue and white tables and chairs: a minimal and friendly location, where the view does the talking.

“Macallè Sicilian Bistrot” is located in the Spidduta (also called Quartiere degli Spiriti because, due to the particular shape of the streets, you can hear the voices of passers-by between one alley and another, without however seeing anyone), with chef Maurizio who wants «tell a whispered Sicily, a traditional Sicilian cuisine freed from the oppressive chains of the past». Maurizio thinks that his is a main road, a goal to reach for all restaurateurs; his is a precise message, dedicated above all to an international clientele, for him much more prepared and ready to implement a new idea of ​​Sicilian catering than the inhabitants of Ortigia. Maurizio, exuberant but very fussy and self-confident, does not want to label his cuisine, the customers who come to him are of a medium-high target, well aware that they will find a different cuisine from the classic one. The “Macallè Sicilian Bistrot” is located in a building rebuilt after the bombings of the Second World War, in an area that is out of the tourist crowds, a quieter corner for guests than other parts of Ortigia. The environment recalls a modern bistro, created and furnished by Maurizio himself, with elements of satirical art and luminous LEDs.

“Piero’s Tavern” rises in the historic center of Ortigia in the tourist alleys, between one small shop and another, in the heart of the “Origian movida”. The restaurant is now fully in the hands of the little girl of the family, Angela, who with her authoritarian temperament controls not only her uncle (and owner), but also her mother, grandmother and staff: she is the face of the restaurant and the room is the his kingdom. Originally from Crotone, Angela was already working at the family restaurant at the age of 16 and now Ortigia is her home. She is lively and cheeky, she doesn’t tolerate arrogant and rude people and she doesn’t hold back under any point of view, she doesn’t like gourmet restaurants, those all treated with little substance, she prefers quantity, in fact theirs. That of the “Tavernetta da Piero” is a traditional cuisine with very little drive towards innovation but not a little original for this: «The recipes are simple, genuine, based on always fresh ingredients: there’s no one like us here», he claims. It is a rustic and unpretentious restaurant, as can be seen from the mise-en-place and the details, where you can breathe a strong family atmosphere. On the walls there are photos of Ortigia taken by Angela, also present on the walls outside the restaurant, where the tables are set up for the service in the evening.

The “Maniace inn” by Mirko is just a few steps away from the Castle, in the district of the same name which takes its name from the Castle which stands on the extreme southern cusp of Ortigia. He manages the dining room, a role he takes very seriously: «To get it right you have to listen to clients just like a therapist“, He says. He has always had the dream of opening his own restaurant and he succeeded in 2016, when he came across the inn. The chef is his sister, in whom he has complete trust. In the inn you don’t find the classic Sicilian cuisine but a modern reinterpretation: the menu changes frequently, what remains constant is the use of local products, however assembled, for example, with creams or cheeses, to obtain a particular mix such as mussels with gorgonzola. Full of tattoos that tell his story, Mirko loves to take care of his outfit. The Castle area is rich in tourism and traditions. The inn is small and welcoming, furnished in the colors of the sea, all white and blue. Outside there is a gracious dehors that overlooks the Ortigia passage.