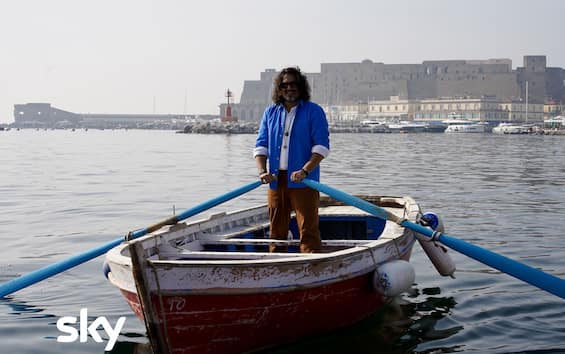 Alessandro Borghese’s next challenge 4 Restaurants (THE SPECIAL) is more special than ever: the new unpublished episode is expected for New Year’s Eve, Sunday 1 January 2023, always on Sky and streaming on NOW, it will be set on the wonderful Naples seafront and will be the 100th number of this show which is a cult beloved by the public.

To celebrate this important anniversary, Chef Alessandro Borghese arrives in the Neapolitan capital, one of the most fascinating, characteristic and loved cities in Italy. And it chooses one of its most evocative districts, that of seafront, the area framed between Vesuvius, the majestic Castel dell’Ovo and the view of Capri and the entire gulf in the distance. A walk about 3 kilometers long, which did not exist until the 19th century, which today can be divided into 3 parts: the first, which from via Nazario Sauro, near the San Vincenzo pier, continues on via Partenope towards Castel dell’Ovo (where legend has it that the Partenope siren, rejected by Ulysses, let herself die by transforming herself into Naples); the second, the Riviera of Chiaia, of Aragonese origin, the most central and ancient part of the seafront and surrounded by noble palaces and overlooking the Villa Comunale; and the third, in the area Mergellina, the road that extends from via Caracciolo to Piedigrotta, at the foot of the Posillipo hill, where there is a truer Naples, between fishing nets and moored boats, a few meters from the port of Mergellina where ferries leave for the islands. However, the whole seafront of Naples has one element in common, the abundance of restaurants, pizzerias, trattorias and bistros where you can eat the typical food of the area: along the 3 km that run along the sea, there are about 100 places to eat.

the previews of the hundredth race

The very special hundredth competition of Alessandro Borghese 4 Restaurants – waiting for the day of New Year’s Eve, January 1, 2023, in prime time on Sky Uno and in streaming on NOW, always available on demand and visible on Sky Go – could not have taken place in a more competitive environment. In challenge are “Grandmother Tittina” by Marianna, “Ostaria Pignatelliby Julius,The Piazzetta” by Alessia and “Osteria del mare Fish & Champagneby Ivan. Once again the rules underlying the challenge have remained unchanged: four restaurateurs with something in common are competing to obtain the coveted “tenby the chef. Each restaurateur invites the other three who, accompanied by Borghese, comment and vote with a score from 0 to 10 location, menu, service, bill of the restaurant that hosts them and the category Special, which changes from episode to episode: all four challengers, in fact, will have to compete on the same dish, the protagonist of that episode, so as to make the competition between them ever more direct and intense, with no holds barred. In this episode, the special category is one of the classics of seafood cuisine, the “spaghetti with clams”, as they say in the city.

As per tradition, this meal too will be preceded by the scrupulous inspection by chef Borghese of the restaurant kitchen. Everything will be observed down to the smallest detail, for an analysis that will then continue during the meal, focusing on the dining room staff, put to the test on reception, table service, description of the dish and the wine. Only at the end will chef Borghese’s judgment be discovered, and with his votes he can confirm or overturn the entire ranking. Up for grabs for the winner of the episode, the coveted title of best restaurant and an economic contribution to invest in your business. Chef Borghese’s journey from next week will continue in other fascinating and characteristic places such as, among others, Ortygia (Syracuse) and the Five lands. All restaurants participating in the program are identifiable through a “sticker” 4 RESTAURANTS exposed outside, a network of venues tested by those in the know: the restaurateurs themselves.

“Grandmother Tittina”: Marianna is one of the owners of this restaurant located in Mergellina, she takes care of hospitality and all the customer’s needs with a truly entrepreneurial spirit. Friends call her “bimba” for her appearance and her way of dressing, but behind this nickname hides a determined, passionate, determined woman with a very specific idea of ​​catering: in fact, the cuisine of “Nonna Tittina”, the imaginary grandmother who gives the restaurant its name, is based on a base of Neapolitan gastronomic tradition with an eye to research and refinement of presentation. Marianna is the first to attach great importance to the first impact: «For me, aesthetics are everything. As Oscar Wilde says, only the superficial don’t care about appearances» he exclaims. The location of “Nonna Tittina”, one of the points of pride of Marianna and all the staff, is designed to be the home of an imaginary grandmother: inside there is even a small balcony (which serves as a mezzanine) and a veranda; overall it is a place with a retro taste but with a youthful soul, with attention to every detail with great attention to colors and furnishings. The mise-en-place is minimal but well-finished, with table runners and cloth napkins.

“Ostaria Pignatelli”: Giulio is the director of this restaurant in the Riviera di Chiaia, managed by various external partners who have premises around Italy. Therefore, even though he is not the owner, he lives it as if it were his own: everything that happens inside the restaurant passes under the supervision of Giulio, who is essentially the soul of the place. He has been working in the restaurant business since he was 13, having started gaining his first experiences as a waiter at that very age: for him it is a 360-degree passion, «Mine is a wonderful profession, I love being around people and when I see the happy customer get up from the table I am happy“, He says. It is precisely on the concept of tavern that Giulio proudly insists, for him it is one of the real strengths of the place: «We could also make linguine with lobster – he claims – but we would no longer be a tavern: in the Neapolitan tavern you have to eat the real dishes of the Neapolitan tradition!». Giulio is cheerful and even when he is nervous he loves to joke: it is no coincidence that his wife always tells him that if «if the world fell you would stay still». He is very fond of the Ostaria menu, for him their cuisine is a source of pride. The name of the restaurant comes from the historic building near the place which, in fact, is called Palazzo Pignatelli; one of its strengths is the tranquility of the area. The restaurant offers typical Neapolitan cuisine: from the stuffed courgette flower served as an appetizer to the aubergine parmigiana and pasta and potatoes with provola.

“The Piazzetta” by Alessia, the irrepressible owner of the restaurant, is located a stone’s throw from the Castel dell’Ovo. She defines herself as a genuine Neapolitan and for her catering is a family matter: in fact, she learned all the secrets of the trade from her father, especially those of leadership, and in fact she is sure of herself and of the potential of her restaurant. She says she is understanding but at the same time rigid and demanding at work, and this is why she always asks for the best of her from her staff, who she feels like family. Unlike other restaurants on the seafront, which have a tourist menu, the proposal of “La Piazzetta” is more exclusive, mostly reserved for a local clientele: it is possible to find the cornerstones of the Neapolitan gastronomic tradition and some slightly revisited dishes. The restaurant has two entrances and is equipped with an outdoor terrace. Inside it is divided into three small rooms, each with a different mise-en-place.

“Osteria del mare Fish & Champagne” is located in Mergellina, in Piazza Sannazzaro, one of the oldest in Naples. Ivano is the owner and chef, for him the Osteria is a dream come true: since he was a boy Ivano, when he skipped school, fantasizing about the future, imagined opening a restaurant of his own right in that small square in Naples . He describes himself as impulsive, touchy and demanding, more than cooking he loves performing: he often cooks in front of customers. The mission is to propose a proposal different from the others: «There is no dish on our menu that you can find in another restaurant» he says, and in fact each dish has an original addition, a signature, a touch from the chef. Furnished in shades of blue, the restaurant features numerous references to the sea and the city of Naples, with fishing nets hanging on the walls and fish-shaped decorations. The restaurant has only one internal room and a small external dehors on the street.

Written by Alessandro Borghese, Nicola Lorenzi and Marco Tangerini. The direction is by Gianni Monfredini