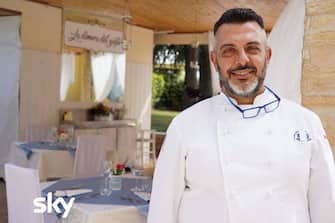 For the first lunch, Alessandro Borghese’s van stops at Campo Marino, one of the four towns on the Molise coast, at La Dimora del Gusto di Giacomo.

2 km from the sea, halfway between the shoreline and the countryside, the restaurant represents a dream come true.

Giacomo offers a menu that reflects the combination of sea and countryside with some creative touches: in addition to the typical octopus in purgatory and cuttlefish with peas, for example, a sea bream turban with cacio horse sauce or gnocchi with broad bean pesto is served. and clams.

In Termoli, in front of the Castello Svevo, where Gianfranca opened Nonna Maria in 2002 together with his sister-in-law.

Fierce and all in one piece, she always wants to win, even when she plays burraco with her friends twice a week.

Gianfranca, who takes care of the dining room, has a classic and national proposal, also including very specific typical dishes of the Termolese tradition on the menu: to the mixed grill and spaghetti with clams he adds, for example, broth and stuffed monkfish.

4 Restaurants, the photos of episode 1 in the best restaurants in Turin

Al Cian, since 1976 owned by Miriana, is a restaurant (winner of the challenge) that in Termoli has made the history of cuisine, created by its parents and renowned for its mother’s dishes.

4 Restaurants, Alessandro Borghese in Turin looks for the best Ristopub

Miriana is a set and polite woman who, before following in her parents’ footsteps, graduated in Law because she wanted to be a lawyer.

In Termoli, if we go down the seafront, in front of the trabucco, Solly’s Oyster Fish was born three years ago.

Even though she comes from Puglia, Solly feels she is “The best female chef in Molise”.

Solly, however, is not afraid to interpret the union between sea and countryside in her own way. And so he proposes both caramelized octopus with horse cheese fondue and seared tuna tataki with hazelnuts.

At the table of the final confrontation the restaurateurs of the Molise coast: Solly, Gianfranca, Giacomo and Miriana.

Winning the title of best restaurant on the Molise coast is Miriana’s Cian, since 1976.

To Miriana the prize of five thousand euros to spend in her restaurant.