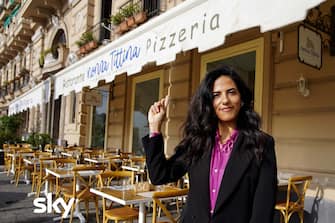 The kitchen of Grandmother Tittinathe imaginary grandmother who gives the restaurant its name, is based on a Neapolitan gastronomic tradition, with an eye to research and refinement of presentation

Marianna attaches great importance to appearance and first impact, this is because for her “aesthetics are everything”

Giulio is the director ofOstaria Pignatelli, in the Riviera di Chiaia “the “in” area of ​​Naples”. Although he is not the owner of the place (managed by various external partners who have places around Italy), he feels the restaurant as if it were his

4 Restaurants, photos of the best Italian restaurants in Edinburgh

Everything that happens inside the restaurant always passes under the supervision of Giulio, who is basically the soul of the place. In the photo the dinner of the restaurateurs and Alessandro Borghese at theOstaria Pignatelli

4 restaurants, Agriturismo Ca’ Lunati is the best restaurant in the Bolognese hills. Interview

Since he was 13 Giulio works in the restaurant business. “Mine is a wonderful job and when I see the customer get up happy from the table I’m happy” declared the restaurateur during the episode of 4 Restaurants

4 Restaurants, photos of the best restaurants on the hills around Bologna

Alessia is the owner of the La Piazzetta restaurant, a step away from Castel dell’Ovo. She defines herself as a Neapolitan DOC and for her, catering is a family matter

4 restaurants, Mediterraneo is the best restaurant in the Venice district of Livorno. VIDEO

Alessia is sure of herself and of the potential of her restaurant. She says she is understanding, but at the same time rigid and demanding at work, and this is why she always asks for the best of her from her staff, her “her family”. In the photo the restaurateurs and Alessandro Borghese at dinner in the La Piazzetta restaurant

4 Restaurants, photos of the best restaurants in the Venice district of Livorno

The walk along the seafront ends where it began, in Mergellina, in Piazza Sannazzaro, one of the oldest in Naples. Here is the restaurant of Ivanowner and chef of theTavern of the Sea

4 restaurants, the Locanda il Gatto Rosso is the best Italian restaurant in Fuerteventura

For Ivan the Osteria is a dream come true. Ever since he was a kid, when he skipped school, Ivano, fantasizing about the future, imagined opening a restaurant of his own right in that small square in Naples. In the photo the restaurateurs during the inspection

For Ivano, the kitchen is also an exhibition. He often cooks in front of customers with the mission of proposing something different from the others. In the photo the restaurateurs and Alessandro Borghese at dinner at theTavern of the Sea

Marianna, Giulio, Alessia and Ivano at the final confrontation table together with Alessandro Borghese

All the news on 4 Restaurants