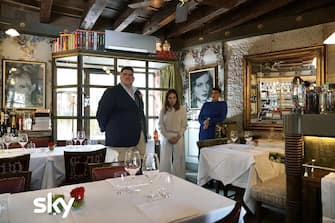 Gianni is the owner of the Ponte Pietra restaurant, a real institution in Verona if we talk about romanticism.

4 Restaurants, photos of the best restaurants on the Molise coast

The location lends itself: suggestive thanks to the terraces and balconies overlooking the river, it has an elegant and aristocratic interior, which recalls an idea of ​​romanticism that is postcard-worthy but never outdated.

The cuisine is mainly traditional, with some gourmet touches: in addition to risotto with Amarone, you can also find tuna cutlet or carbonara with shrimp and truffle.

Among the alleys of the historic center up to a stone’s throw from Piazza delle Erbe, there is Antica Amelia Bistrot di Micol, owner and chef.

Self-taught, he opened with the desire to create a romantic and intimate restaurant, but with a chic romanticism that meets the more touristic one.

In his menu we find trout fillet in saor with goat yogurt, mixed boiled meatballs, but also cacio e pepe with mountain cheese and caviar with potatoes and salted butter.

Micol defines herself as a dreamer and is very moved when she attends a marriage proposal in her club.

4 Restaurants, the photos of episode 1 in the best restaurants in Turin

A real river in flood, Barbara studied psychology before turning to catering, a subject that helps her understand how to best convey the idea of ​​romance in her restaurant.

4 Restaurants, Alessandro Borghese in Turin looks for the best Ristopub

The menu offers traditional tavern cuisine, both Veronese and Italian, ranging from meat to fish, without too many frills but with attention to quality.

Vittorio in 2020 opened his restaurant giving it his nickname.

Vittorio is self-congratulatory without fear of being so, he defines himself as a character who is only 29 years old but does not give up on classic clothes and the cigar.

For Vittorio, the opening of Benda brought fresh air to the city, ousting even the most renowned restaurants. For him, a romantic place does not need tacky things, such as roses or white tablecloths, but he prefers to let the atmosphere create the magic.

The owners of the most romantic restaurants in Verona will be at the final table: Vittorio, Barbara, Gianni and Micol.

The best romantic restaurant in Verona is Micol’s Antica Amelia Bistrot which has decided that it will spend its prize money for its staff.