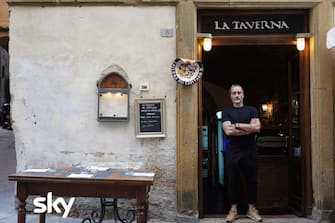 Alessandro’s journey begins in the heart of Siena, in a tavern a few steps from the Duomo: the Taverna del Capitano.

4 Restaurants, Alessandro Borghese in Asti, photos of the best restaurants in the Asti area

The captain of the tavern is Niccolò: beautiful face, pigtail and tattooed hands, he defines himself as a pirate, partly by nature, partly because he spends the winter in the Caribbean where he works as a personal chef.

4 Restaurants, photos of the best eco-green restaurants in Trentino

The restaurateurs get ready to taste the cuisine of La Taverna del Capitano, an authentic cuisine, defined by the chef as “a little rough”

4 Restaurants are back, Borghese chefs on the hunt for the best eco-green cuisine

Niccolò faces the race as a pirate raid but also as a Knight. Play to win, because as he himself says, “competitive spirit is in his blood”

4 Restaurants, the interview with Sandra, winner of the last episode

4 Restaurants, last stop in Milan. All the previews

At the Particular the classic Sienese dishes meet the Japanese culture

4 Restaurants in Parma, the interview with Elio Greci, winner of the episode

Original, young and beautiful, Raffaella is sought after in the ways, in the location, just outside the walls, under the Risalita di San Francesco, but above all for the kitchen

At the dinner at Particolare, restaurateurs find dishes on the menu such as hare with mushrooms, caviar and oysters or quail breast with horseradish and katsuobushi

From Raffaella’s refinement we pass to Ghigo’s Tuscan truthfulness. Known by his friends of the contrada della Torre with this nickname, Federico is known in Siena above all for another reason: his game dishes

Part of the game served at La Colonna, Ghigo personally captures it to take it to his restaurant outside the walls of Siena

Ghigo loves game so much that he even puts it on pizza, in the form of wild boar sausage

In Ghigo’s menu, restaurateurs also find fish, because as he says “if one is good, he can do whatever he wants!”

The journey ends in the center of Siena, always near the San Francesco ascent, but this time inside the walls

Marco took over a small deli and transformed it into a real restaurant: the Osteria Le sorelline

For the Contrada comrades, Marco is a good luck charm. In fact, every time it decides to do something new, the Giraffa district wins the Palio

Marco’s cuisine is never banal. For him, tradition is not everything, in fact, in the kitchen he gives free rein to his creativity through innovative dishes with Asian influences, such as gyoza ravioli stuffed with pheasant

For Marco cooking is a way of expressing himself, “the reason why I get up in the morning”, he strongly believes in his own abilities and “always evolves, like an artist who changes style!”

Niccolò, Raffaella, Ghigo and Marco at the final confrontation table