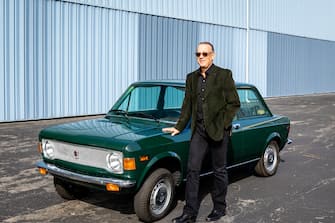 The Fiat 128 is the car used by Tom Hanks in the film The Post of 2017. The subcompact was auctioned for charity in Santa Monica: the proceeds will be donated to Southern California Public Radio

Tom Hanks’ Fiat 128, used in the film The Post, is up for auction for charity

The Lancia Aurelia B24S Spider with which Vittorio Gassman and Jean-Louis Trintignant cross the Italy of the economic boom in Il Sorpasso by Dino Risi, an absolute masterpiece in the history of cinema

The Aston Martin DB5 that James Bond (Sean Connery) drives in 007 – Mission Goldfinger, one of the best films of the saga directed by Guy Hamilton in 1965

The Lotus Esprit is the car supplied to James Bond (played by Roger Moore) in 007 – The Spy Who Loved Me. In addition to the usual futuristic gadgers, the machine can be transformed into a submarine if necessary

The Audi e-Tron GT electric car driven by Tony Stark, aka Iron Man, in Avengers. Endgame. It is known that the Marvel superhero played by Robert Downey Jr is a huge fan of motors

The Autobianchi Bianchina Berlina, produced from 1962 to 1969, is the machine of reason Ugo Fantozzi, the iconic character played by Paolo Villaggio

The best films of Paolo Villaggio

The Fiat Dino 2400 Spider driven by Enzo (Carlo Verdone) in the film Un Sacco Bello. Characterized by the iconic red lightning bolts on the sides, it is used by Enzo for a trip to Poland with his friend Sergio

Bluesmobile is the name of the car of the “Blues Brothers” (John Belushi and Dan Akroyd), in Universal Pictures’ film The Blues Brothers, shot in 1980. It is described in the film as a car abandoned by the Mount Prospect police, but it is a 1974 Dodge Monaco Sedan, used by the California State Police

John Belushi: a myth of cinema, between Animal House and The Blues Brothers

The Tumbler-Batmobile from Batman Begins, the first chapter of the trilogy signed by Christopher Nolan dedicated to the masked Vigilante of Gotham City. The vehicle is very different from the previous batmobili, a cross between a Lamborghini and a Hummer. In the film it is a camouflage “Bridge Vehicle” prototype designed by Wayne Enterprises and later reused by Bruce Wayne as Batman’s car. It is equipped with a 5.7-liter V8 General Motors-Vauxhall 500 horsepower engine. The Tumbler goes from 0 to 100 km / hour in less than 6 seconds.

Batman’s Batmobile – Returns, The car was designed by conceptual illustrator Julian Caldow. The body of the car was sculpted by Keith Short in collaboration with Eddie Butler: it was long, low and sleek, and was built on a Chevrolet Impala chassis. One of the two specimens used in the film is now on display at the Petersen Automotive Museum in Los Angeles; the other is in Malibu in Jon Peters’ private collection. The rear of the Batmobile resembles that of the Fiat Turbina, a gas tube concept car built by Fiat in 1954

The Batman, the film review

The Plymouth Fury, that is, Christine – The infernal machine, the protagonist of the horror film directed by John Carpenter, based on the novel of the same name by Stephen King

All videos by Mister Paura

The 1976 Chevrolet Camaro that transforms into the Bumblebee robot in the Transformers movie, directed by Michael Bay in 2007

The car starring in the film Titane, won the Palme d’Or at the 74th Cannes Film Festival.

The Ecto-1 is the car used in the Ghostbusters movie as an emergency vehicle. It is also known as Ectomobile, for the song from the soundtrack Cleanin ‘up the town by the Bus Boys, where it is nicknamed in this way. The model is a 1959 Cadillac Ambulance Miller-Meteor limo-style endloader combination,[1] version produced by Miller-Meteor of Piqua, Ohio, which was licensed to modify Cadillac vehicles into ambulance, hearse and limousine versions.

The 1961 Ferrari 250 GT California Spider driven by the protagonists of A crazy day of vacation, a teenage cult movie written and directed by John Hughes in 1986

The Chevrolet Nova SS with which the crazy and sadistic Stunt Mike (Kurt Russell) reaps his victims Grindhouse – Death Proof, 2007 film, written and directed by Quentin Tarantino. the film is one of the two segments of Grindhouse, created as a tribute to the films of the seventies such as Punto zero and Convoy – Trincea d’asfalto.

The legendary Citty Citty Bang Bang, star of the 1968 film of the same name written by Roald Dahl and Ken Hughes, with songs by Richard M. Sherman and Robert B. Sherman, based on Ian Fleming’s book “Chitty Chitty Bang Bang: The Magical Car ”

the legendary Ford Mustang GT390 Fastback, in metallic dark green color, used by Steve McQueen in the film Bullitt, signed in 1968 by director Peter Yates. The car is the protagonist of a memorable challenge with the black Dodge Charger R / T with Bill Hickman at the wheel

The Ford Mustang Shelby GT 500 “Eleanor” used in 2000 by director Dominic Sena for the film “Out in 60 seconds” with Nicolas Cage, Angelina Jolie and Robert Duvall

The blue AMC Pacer on which Wayne, Garth and their friends lip-sync Bohemian Rhapsody by Queen in the teen comedy Fusi di testa, directed by di Penelope Spheeris

The BMW X5 is the absolute star of the movie Locke, played by Tom Hardy. The film, in fact, tells the journey the journey from Birmingham to London by Ivan Lockea precise and meticulous middle-aged foreman, grappling with the consequences of his life choices.

The 1969 orange Dodge Charger, with black numbers “01” on the doors and a confederate flag painted on the roof. M is known by the nickname “General Lee” and used by cousins ​​Duke (Bo and Luke) in the Hazzard movie, transposition film of the famous TV series

The 1973 Ford Gran Torino is the car of the Dude Jeffrey (Jeff Bridges) protagonist of The Big Lebowski by the Coen brothers.

The Alfa Romeo Spider Duetto is the car that Benjamin (Dustin Hoffman), the protagonist of “The Graduate”, receives as a gift from his father Bob for his graduation.

The 1969 Ford Mustang Boss 429, the favorite car of John WIck, the character played by Keanu Reeves and protagonist of the homonymous film saga

T he Ford Explorer of Jurassic Park, the SUV that in the first film of the saga (released in 1993) that had the task of accompanying (and protecting) the visitors of the park on their tour of prehistory.

The Chevrolet C-2500 Crew Cab Silverado, better known as Pussy Wagon, is the vehicle that “The Bride / Black Mamba” (played by Uma Thurman) steals from a man, after killing him in Kill Bill Volume 1, Quentin’s cult. Tarantino

The V8 Interceptor is the car used by the fictional character Max Rockatansky in the Mad Max movie saga. The car is based on a 1973 Ford Falcon XB GT Coupé, modified by the manufacturers and credited in the film as a model with incredible capabilities thanks to a volumetric compressor installed on the engine, although in reality this was not really working.

The DeLorean DMC-12 is the only car model built by the DeLorean Motor Company, from 1981 to 1982. The car became world famous for its appearance in Robert Zemeckis’ Back to the Future film trilogy, in which one was was used by Dr. Emmett “Doc” Brown as the basis for his time machine.

The Pontiac 6000 is the car you see in the fanta-action Roboc. The vehicle is renamed «SUX» because literally «it sucks

Starsky and Hutch, the film inspired by the famous television series tells the exciting stories of a couple of policemen, David Starsky and Kenneth Hutchinson, known as Hutch. Their service car, coded “ZEBRA 3”, is a splendid one F.ord Gran Torino red, made unmistakable by a striking white band

The 1970 Dodge Charger used by Dominique Toretto in Fast and Furious, the first chapter of the film saga with Vin Diesel

Thelma & Louise’s Ford Thunderbird is the car that accompanies them on their adventure, until the conclusion with the famous final scene