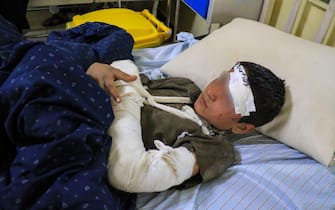 A violent earthquake of magnitude 5.9 last night hit the southeast ofAfghanistan, on the border with Pakistan. The shock caused, according to an official source, at least a thousand deaths

WATCH THE VIDEO: Afghanistan, the story of Asthma saved by his professor in Italy

There earthquakeaccording to the US Geophysical Institute (Usgs), was recorded 44 km southwest of Khost, near the border with Pakistan

Houses destroyed, injured and missing: news on the earthquake in Afghanistan

The hypocenter was located at one depth of 10km. Official sources speak of at least a thousand deaths e 1,500 injured. According to CNN, most of the victims were registered in the districts of Giyan, Nika, Barmal and Zirok

UK, country blocked due to the biggest train strike of the last 30 years

The earthquake hit a population that is experiencing a major humanitarian crisis. According to reports from the World Food Program, the loss of jobs, the lack of cash and the increase in prices “are creating the conditions for a new class of hungry in Afghanistan”

I am already 22.8 million Afghansover half of the population, who suffer from hunger. The country is on the brink of a economic collapsewith the local currency at an all-time low and food prices on the rise

CNN also reports that, according to Taliban spokesman Zabiullah Mujahid, an emergency meeting was held to organize the transport of the injured and first aid for the victims of the earthquake

Pope francescoat the end of the general audience in St. Peter’s Square, he said: “I express mine proximity to the wounded and to those affected by the earthquakeand I pray in particular for those who have lost their lives and their families ”

The Pontiff then added: “I hope that with theeveryone’s help they can alleviate suffering of the dear Afghan population ”