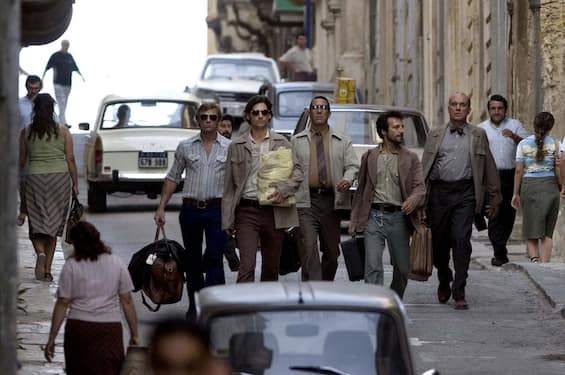 It is true that dawn is the time when dreams die. At sunset you expect it a little longer, there is already a sense of the end. But the dawn should only bring light. And never the one that comes out, intermittently, from firearms. Exactly fifty years ago this entered Munich, in the Olympic village. A group of Palenists, who later would have known to belong to the Black September terrorist movement, attacked the Israeli viallgio, killing two instantly and taking nine others hostage. That they will only gain a few breaths of additional life as they too will die, a fate that will also be up to five Palestinians and a German policeman. Israeli Prime Minister Golda Meir authorizes the Wrath of God operation and asks the Mossad to see the murdered athletes. Avner Kaufmann, masterfully played by Eric Bana, is in charge of the commando a bit obtorto collo, something does not convince him; alongside him are Steve (Daniel Craig), Carl (Ciaràn Hinds), Robert (Mathieu Kassovitz) and Hans (Hanns Zischler). Steven Spielberg in Munich tells what happened next.

Spielberg’s analysis is precise and merciless. One of the strongest elements is Avner’s sense of disorientation that if on the one hand he is aware that revenge must exist, on the other he also doubts because the CIA and the KGB come into play and do not approve the Israeli strategy and this clash of powers. occult carries three other corpses, they are those of Carl, Robert and Hans, all in Avner’s team, who even more feels like the gear of a conspiracy, of something greater than himself. The scenario becomes clearer to him when he returns to Israel, after killing six out of eleven Palestinian terrorists. He understands that when it happened he made him lose the sense of justice, giving it back to those who had broken into the Olympic village. The stronger he sprouts the love for the family (he has a wife and a daughter) and the stronger the feeling that he and his boys killed perhaps were not the real culprits. The final interview with the member of the Mossa Ephraim (Geoffrey Rush) gives him further certainties that good and evil too often coexist and that those who move in the shadows have the convenience to make us that they do not.