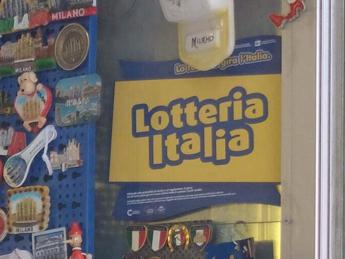 In this edition of the Italy Lottery, 6,359,771 tickets were sold, against 4,578,675 last year, with a growth – recalls the specialized agency Agimeg – of + 38.9%. Sales in the authorized network of tobacconists and betting shops show a + 28.1% (from 3.3 to 4.3 million). In detail, tickets sold in tobacconists amounted to 3.3 million, + 24.4% compared to 2.6 million in 2020, while coupons sold in bars grew by + 47.7%, from 638,780 to 943,320. An increasingly growing value also for local distributors (+ 55.5%), while the item “other distributors” travels with + 94.6% of sales. It should be noted that almost 70% of the tickets are sold in the “historic” network (tobacconists and betting shops) for the distribution of Lottery Italia tickets. In the other sales channels, in Autogrill – another classic place for the sale of Lottery Italy coupons and where important prizes always end up at each edition – there is in fact a record growth of + 107%. It should be noted that about 12% of total tickets are sold in Autogrill and service stations (they were 8% in the last edition). On the other hand, a minus sign for online purchases: online sales in fact mark a -30.6%.

Really important numbers for the oldest National Lottery in our country, strongly supported by the Adm, thanks to the action of the Director General of the Agency, Marcello Minenna, and the Director of Numerical Games and Lotteries, Stefano Saracchi. The golden year, Agimeg still remembers, was 1988-89, when over 37.4 million tickets were sold. That year the Lottery Italy was combined with the television program ‘Fantastico 9’, hosted by the Montesano-Oxa duo. In second place 1986, with 33.6 million (combined with ‘Fantastico 7’), followed by 1989 with 33 million (‘Fantastico 10’). Lagging behind for ticket sales, before this edition (4.7 million), 2019, with 6.7 million tickets sold, followed by 2012 which stopped at 6.9 million. Lottery Italy: Rome and Lazio in the lead for tickets sold.

There are those who chase a millionaire win for life, but in the history of the Italy Lottery there are cases of sensational forgetfulness. In the last 20 years, as the Agimeg agency recalls, no prizes amounting to almost 30 million euros have been collected. The primacy (in negative) belongs to the 2008-2009 edition, when a player from Rome did not collect the first prize of 5 million euros, then put up for grabs again the following year (and this time won and collected). That edition should also be remembered for the record of uncollected prizes, the total of which even touched 7 million euros. In the 2015-2016 edition, over 2.9 million euros have been ‘forgotten’, including the second prize of 2 million euros won in San Nicola La Strada, in the province of Caserta. But even in 2012 there was a sensational case of forgotten winning. In fact, the second prize of 2 million euros was never collected and in total almost 3 million were left in the state coffers, while in 2014 1.7 million were forgotten, including the fourth prize finished in L’Aquila.

Autogrills have always been an important network for selling and winning the Italian Lottery. Last year at the Prenestina Ovest service area, in Gallicano nel Lazio, the one million euro prize was won by the Italian Lottery. The year before, the ticket combined with the 2.5 million second prize was sold in Gonars, in the province of Udine, in a service station on the A4, in the two previous editions they were even the two first prizes of 5 million to finish along the Italian motorways, in Anagni (FR) in 2017 and Sala Consilina (SA) in 2018. Numbers in hand, from 2004 to today in Autogrill and service stations – reports Agimeg – a total of over 65 million euros have been won. Among the luckiest years 2006, with the record of 18 winning tickets for € 9.9 million in prizes, and 2012, with 38 winning tickets for € 8.8 million.

In the latest edition, in addition to the 5 million first prize of Sala Consilina, also won the 1 million euro prize on the A1 at Fabro (TR). The rules for collecting winnings from the Italian Lottery The winning ticket must be presented intact and in original – copies of any kind are therefore excluded, even if authenticated – at a branch of Banca Intesa Sanpaolo or at the “Lotterie Nazionali srl” Prize Office – viale del Campo Boario, 56 / D – 00153 Rome. The ticket can also be sent to the aforementioned office, by registered letter with return receipt, indicating the personal details, the applicant’s address and the required payment method (cashier’s check, bank or postal transfer). Prizes must be requested by the 180th day following the publication of the official drawing bulletin in the Official Journal. Usually the deadline is in the first half of July.