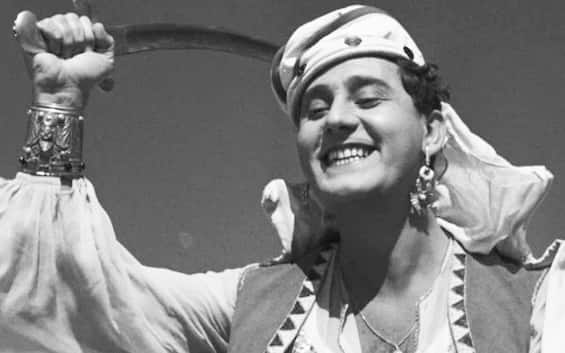 Probably the statue depicting Alberto Sordi in the role of Lo Sceicco bianco that stands at the entrance to the Fellini Museum he laughs heartily. That quiet, cheeky, funny sentry who sways carefree on a swing, within the walls of Castel Sismondo, certainly does not feel that she is 70 years old. Yet, that irresistible scoundrel who responds to the name of Fernando Rivoli was born in 1952. Federico Fellini’s first film, after co-direction with Alberto Lattuada in Variety Lights, was presented at the thirteenth edition of the International Film Festival from Venice. It was September 6, and it was not exactly a debut with a bang, a “good first”. Far from it. But time is the gentleman. Thus, playing in advance, the Fellini Museum Rimini and the Department of Arts – University of Bologna in collaboration with the Cineteca comunale di Rimini, La Settima Arte – Cinema e Industria, CFC (Culture, Fashion, Communication International Research Center) organized for Friday April 8 a conference at the Teatro degli Atti in Rimini. Following Saturday 9 at the Fellini Museum in the Palazzo del Fulgor, the photographic exhibition “Fellini between dream and reality: the photographic contribution of Rodrigo Pais”, curated by Glenda Furini and Guido Gambetta will be inaugurated.

It is known, sometimes, life is a novel. Indeed, a photo novel, given that we are talking about a work that delights in sbertucciato that two-dimensional, fatuous and caricatured world populated by exotic heroes and dreaming girls. The subject of Lo Sceicco bianco was by Michelangelo Antonioni and Alberto Lattuada should have directed it. But between abandonments and second thoughts, in the end the production chose to entrust the direction to Fellini. The Rimini master remembers that experience in this way:

“One day I realized I was a director. It was the first day that the White Sheik was filmed and I was on a boat between Fiumicino and a motor cutter, anchored offshore where the whole crew was. I had left Juliet at dawn with the same heartbeat as when taking an exam. I even went to a church and tried to pray and on the road to Ostia, my tire had burst. My collaborators were all on board and in that anchored boat I saw my destiny. I had to shoot a complicated scene. As I approached the cutter I saw the faces of the workers, the spotlights, the extras. Wondering what am I going to do now? I no longer remembered the plot of the film, I had only one desire: to escape. But I had just set foot on the boat that I began to give orders (…) In those few minutes of crossing I had become a demanding, pedantic, director with all the defects and qualities of the true directors I had criticized and admired.”

The White Sheikh: from flop to masterpiece

As often happens, some masterpieces of the seventh art are not immediately understood. And it is the case of Lo Sceicco Bianco. At the screening at the Venice Film Festival, the film was booed loudly. And the film remained in theaters for a laughable time. Moreover, the film contributed to the legend that Alberto Sordi was not suitable for the big screen. The great Roman actor explains the flop as follows:

“The White Sheikh was unsuccessful because he was so far ahead of his time. (…) My character was a kind of beast, a man who could not even speak, he must have looked like the little girls of the countryside and suburbs. He disconcerted the audience that they weren’t used to this kind of comedy, the truth about a character like that-“

The criticisms at the time spoke of a “conventional, coarse, poor” direction and an “unhappy” writing. And now, seventy years later, Fernando Rivoli continues to swing joyfully to the notes of the clownish fanfare composed by Nino Rota. Between Giulietta Masina’s cameo and Leopoldo Trieste’s exceptional acting performance (who initially refused the part), Lo Sceicco bianco is preparing to conquer Rimini and the world once again. Because as Fellini teaches. “Making a film is like taking a journey, but I am interested in the journey in the departure, not the arrival”. For this reason, one of the greatest directors in the history of cinema of all time, he always returns to manifest himself in the corners of the city where he was born.

There will be 14 researchers and scholars, coming from the major Italian universities, who will alternate on the stage of the Teatro degli Atti during the two sessions, preceded by a lecture by Gianfranco Angelucci, historical collaborator of the Rimini Maestro, entitled “The invention of reality”.

Here are the names of the speakers and the title of their speech: Francesco D’Asero (Roma Tre University) “A sheikh on the swing: traces of Alberto Sordi’s deviant infantilism in the work of Federico Fellini”Fabio Melelli (University for Foreigners of Perugia) “Brunella Bovo, the dreamy look of a luminous meteor”Pietro Ammaturo (University of Basilicata) “Dear Ivan, or the story of an eternal second: Leopoldo Trieste between Sordi and Fellini”Emiliano Morreale (La Sapienza University of Rome) “Albertone sheikh: Sordi’s performance and its (non) reception”Sara Martin (University of Parma) and Dorothea Burato (University of Parma) “The“ minor friends ”of the characters. The costumes in the film The White Sheikh “Gina Annunziata (Academy of Fine Arts of Naples) “Orientalism, otherness and colonial echoes in The White Sheikh”Mirco Melanco (University of Padua) “The white sheikh: textual analysis from the original screenplay”Andrea Minuz (La Sapienza University of Rome) and Francesca Cantore (La Sapienza University of Rome) “The White Sheikh: archival materials for an analysis of the script”Elena Gipponi (IULM University of Milan) “All the colors of Lo sheikh white. Comparing chromatic regimes and perceptive regimes “Stefania Carpiceci (University for Foreigners of Siena) “The white sheikh between vision, enchantment and movement”Roy Menarini (University of Bologna) “Fellini parodies: Roberto Benigni and the beige sheikh”. Before the start of the two sessions, moderated by Roy Menarini (University of Bologna) and Nicola Bassano (Cineteca di Rimini – Fellini Museum) there will be the institutional greetings of Chiara Bellini, deputy mayor of the Municipality of Rimini, and Federica Muzzarelli head of UOS Rimini of the Department of Arts of the University of Bologna.

On Saturday 9 April the photographic exhibition will also be inaugurated at the FM-Fellini Museum in the Palazzo del Fulgor “Fellini between dream and reality: the photographic contribution of Rodrigo Pais”curated by Glenda Furini and Guido Gambetta.

The series of images that make up the exhibition “Fellini between dream and reality: the photographic contribution of Rodrigo Pais” testifies to some important passages in Federico Fellini’s artistic career. Rodrigo Pais portrays him on the street, on public occasions, in interviews, previews and awards.

The narration in images shows unprecedented details from Fellini’s life and the environment that surrounds him: an affectionate kiss to his wife Juliet leaving for Los Angeles for the film’s Oscar nomination “The nights of Cabiria”the cast choice of “Toby Dammit”, a street interview with the journalist Berenice, the opening ceremony of the filming of The Temptations of Doctor Antonio, the world premiere of the film “8 ½” at the Cinema Fiamma in Rome and the award ceremony for the Oscar as best film foreigner by the Prime Minister Aldo Moro. And again the rich photo reportage made during the filming of “An hour (and ½) with the director of 8 ½” with his journalist friend Sergio Zavoli or the images taken at a coffee table in Piazza Santa Maria in Trastevere during the making of the film “Rome”, on a particular occasion in which reality and fiction, cinema and news inevitably intertwine and clips of films are viewed by investigators in search of clues about an alleged murderer. A particular section of the exhibition is dedicated to the events that inspired or were inspired by the film La dolce vita.

Entrance included in the Fellini Museum itinerary; admission to the Palazzo del Fulgor only 3 euros.