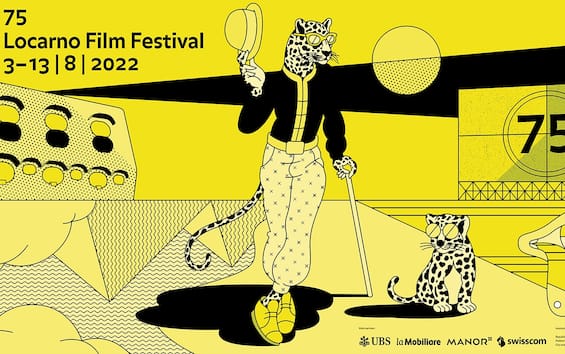 The Locarno Film Festival, directed for the second consecutive year by Giona A. Nazzaro, celebrates its 75th anniversary with a program that, faithful to its history, is betting on cinema and its new forms, all to be discovered in the films that will be proposed by the 3 to 13 August. The opening film will be Bullet Train with Brad Pitt and Aaron Taylor-Johnson which after the preview will be released in Italian cinemas starting from 25 August

For the occasion, there will be numerous initiatives dedicated to retracing the history of the Festival and beyond. Like the publication of the volume Locarno on / Locarno off: history and stories of Lorenzo Buccella’s Film Festival, centered on the official news and the unpublished background. Here is the statement of the artistic director Giona A. Nazzaro:

“The Festival presents a broad, diversified and inclusive program, with the competition hosting established names in world cinema, confirmations and absolute discoveries. On the occasion of its 75th anniversary, faithful to its vocation for freedom, it offers itself as a place to discover and discuss cinema in all its manifestations. With an eye always firmly fixed on the future. “

The Program of the Locarno Film Festival

The Piazza Grande, an immense space capable of welcoming up to 8,000 spectators and spectators every evening, is the heart and showcase of the Festival. Its giant screen, one of the largest in Europe, equipped with extraordinary technical projection qualities, makes the Piazza Grande one of the most beautiful open-air cinemas in the world. The section will propose 17 films among the films which Annie Colèrand Blandine Lenoir with Laure Calamy, Where the Crawdads Sing by Olivia Newman with Daisy Edgar Jones – who will receive the Leopard Club Award on the evening of 5 August -, Paradise Highway with Juliette Binoche and Frank Grillo, Une femme de notre temps with Sophie Marceau, Vous n’aurez pas ma haine by Kilian Reidhof based on the homonymous book by Antoine Leiris, who lost his wife in the terrorist attack on the “Bataclan” in Paris …, and two Italian films in world premiere: Delta by Michele Vannucci with Alessandro Borghi and Luigi Lo Cascio e Very quietly by Nicola Prosatore with Dominique Donnarumma and Antonia Truppo.

The Italian presence is also nourished in the international competition: the section that explores the new territories of cinematographic art this year includes 17 titles – 7 directed by women – all in world premieres, including The Pataffio by Michele Lagi e Gigi reads it by Alessandro Comodin, who will compete for the Golden Leopard alongside titles such as Skazka (Fairytale) by Aleksander Sokurov, Bowling Saturne by Patricia Mazuy, Stella est amoureuse by Sylvie Verheyde, Tales of the Purple House by Lebanese director Abbas Fadel, Regra 34 by Julia Murat.

In the Out of Competition section, the first two episodes of Prism, the new Italian Original series by Ludovico Bessegato, written by Ludovico Bessegato and Alice Urciuolo and produced in Italy by Rosario Rinaldo’s Cross Productions for Amazon Studios. Prisma will be available exclusively on Prime Video this fall.

The homage to Douglas Sirk

The retrospective of the 75th edition will be dedicated to Douglas Sirk. The complete presentation of his works will allow us to reconstruct and recontextualize the extraordinary parable of this director. In the Retrospective, curated by Bernard Eisenschitz and Roberto Turigliatto, there will be no shortage of tributes paid to him by other great masters of modern and contemporary cinema. For the occasion, a book written by Bernard Eisenschitz will also be published, the first to be able to draw on the archives of the Sirk family kept at the Cinémathèque siuisse, published by Les éditions de l’Œil.

The other sections of the Festival

Among the other competitive sections we mention:

Filmmakers of the Present Competition

The selection dedicated to the discovery of the cinema of tomorrow includes 15 films: first and second works, all world premieres.

To the competitions dedicated to short films by international emerging talents – including, the only Italian, Pillow face by Saverio Cappiello – and Swiss returns to join the Competition Short Authorlaunched with great success last year and reserved for established directors and directors, for a total of 40 works, all presented as world premieres.

This year the selection is completed by the presentation of 12 short films made as part of the Spring Academy, led by director Michelangelo Frammartino.

We also report in the non-competitive section Histoire (s) du Cinéma, the restoration in 4K of Time to Love by Elio Ruffo, made in 2022 by Cineteca Milano MicLab starting from the original copy kept at Cineteca Milano