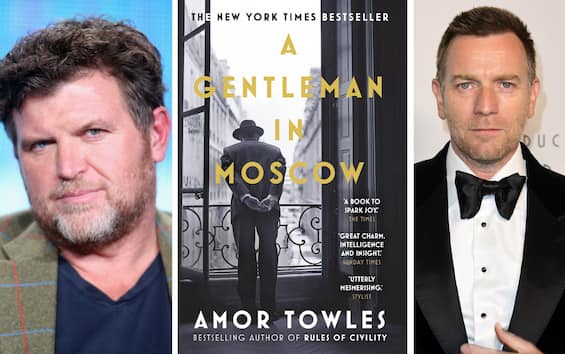 The television series has finally been officially announced A Gentleman in Moscowpreviously presented but still without a putative father, that is, a director.
Now instead the chair from director is finally busy: Sam Miller will sit on it. He reports it exclusively The Hollywood Reporter.

It is the acclaimed British director who is responsible for directing the television adaptation of the novel by Amor Towles. Miller will also executive produce and direct Ewan McGregor, who was previously announced as the lead on the project last August.

The show will bring the story of Count Alexander Rostov, the character played by McGregor, to the small screen. It will be released for Paramount + and Showtime: it will debut exclusively on Paramount + internationally in 2023, and on Showtime in the United States.

Sam Miller is one of the hottest names in directorial panorama: he won a BAFTA Award and is famous for high-level projects, including the eight-episode thriller series Surface, produced in 2022 for Apple TV + by Apple Studios and D Hello Sunshine. Also noteworthy are the TV series I May Destroy You – Trauma and rebirth by and with Michaela Coel (for which Miller, also director, won a BAFTA) and the drama and crime series Luther.
For I May Destroy You – Trauma and rebirth And Luther he also received three Emmy nominations

Miller is represented by UTA, Roxana Adle at Lark Management and Ragna Nervik.

The show will be a miniseries and production will begin in early 2023.
It is based on a script that adapts Amor Towles’ bestselling novel, the namesake A Gentleman in Moscow.

The series is produced by eOne in association with Paramount.

Ewan McGregor (the Star Wars, Trainspotting) leads the cast as Count Alexander Rostov “who, in the aftermath of the Russian Revolution, discovers that his golden past puts him on the wrong side of history,” according to the official synopsis of the plot.

“Spared from immediate execution, he is locked up at the behest of a Soviet court in an attic of the opulent Hotel Metropol, threatened with death if he ever sets foot outside again. As the years pass and some of the most tumultuous decades in Russian history unfold outside the hotel doors, Rostov’s circumstances allow him to step into a much broader world of emotional discovery. As he builds a new life within the hotel walls, he discovers the true value of friendship, family and love “, reads the official presentation of the plot.

A Gentleman in Moscow is written by showrunner and executive producer Ben Vanstone (All Creatures Great and Small, The Last Kingdom). It is the first production to see eOne’s deal with Tom Harper’s Popcorn Storm Pictures.

The series is part of Paramount + ‘s strategy to commission 150 international original projects by 2025.
A Gentleman in Moscow will debut on the streamer next year in the UK and in all international markets where the service is available, including Italy.
Paramount + is continuing to spread to overseas markets. By the end of this year it will also be inaugurated in Germany, Switzerland, Austria and France.

A Gentleman in Moscow is one of the first original UK commissioned dramas to debut on Paramount + internationally. Other series with the same fate are The Flatshare, Sexy Beast, No Escape And The Burning Girls.