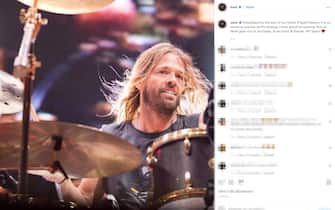 Taylor Hawkins, drummer of the Foo Fighters, died at the age of 50 in a hotel in Bogota, where the band is for a stop on the tour in Latin America. As soon as the news spread, many musicians and other famous people wanted to remember and pay homage to the artist with a message on social media. “Devastated by the loss of our friend,” he wrote slash on Instagram by posting a picture of Hawkins on drums

The news of Taylor Hawkins’ death was given by Foo Fighters on their social profiles. “The Foo Fighters family is devastated by the tragic and untimely loss of our beloved Taylor Hawkins. His musical spirit and his infectious laugh will live with us all forever. Our hearts go out to his wife, his children and his family “, reads the message

“He was a great person and an incredible musician,” he wrote Ozzy Osbourne

The memory of the Smashing Pumpkins

Miley Cyrus shared in his stories a picture of Hawkins smiling on drums and the words: “This is how I will always remember you”

The message of the Nickelback

“The world was so lucky to have you,” he writes Finneas