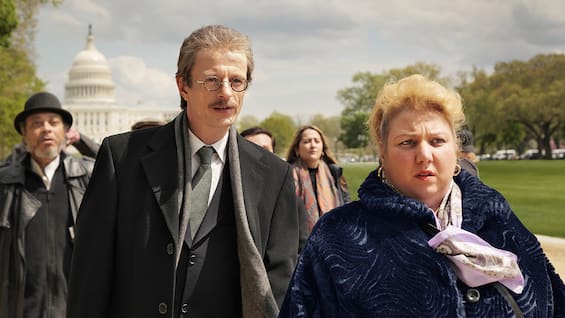 “A MAMMA AGAINST GW BUSH” is in Italian cinemas from December 1st, directed by the German director Andreas Dresen which, despite the bittersweet tone with hints of comedy, recalls a true story of unjust detention, torture and denial of fundamental human rights which to us Italians it is very reminiscent of the tragic story of the young researcher from Trieste killed in the Egyptian prisons, albeit with the necessary differences.

With the patronage of AMNESTY INTERNATIONAL ITALIA, after winning two Silver Bears at the Berlin Film Festival 2022, the film is presented locally by meetings and speeches by exponents of culture and the defense of civil rights.

The film will also be screened in its special appointments: Monday 5 December at the Cinema Palestrina in Milan (8.00 pm) and Tuesday 6 December at the Cinema America in Genoa (8.45 pm). All three screenings will be attended by the lawyer Alessandra Ballerini, specialized in human rights and immigration and lawyer of the Regeni, Paciolla and Rocchelli families, accompanied by other interlocutors. In the presentations in Genoa and Milan, the lawyer will give a brief introduction before the screenings, while in Rome he will make a comment at the end of the screening.

Considered one of the film-revelation of this season, “A mother against GW Bush” is a dramedy based on a true story, which has the ability to make people smile even by delving into a reality with very dramatic contours of worldwide resonance: a great work by screenplay, (by Laila Stieler) which in fact obtained one of the two Berlin Bears. The other award went to an outstanding female lead, here in her happy big screen debut: Meltem Kaptan, in a strong woman role à la “Erin Brockovich”.

She is the centerpiece of this gripping and touching story as Rabiye, a vital German housewife who lives with her family in a terraced house in Bremen. When, after the September 11 attacks, her 19-year-old son Murat is accused – without any proof – of terrorism and interned in the notorious Guantanamo Bay prison in Cuba, Rabiye transforms into a mother-courage, increasingly involved in a fierce international legal battle to defend the human rights of her innocent boyfriend.

With the help of an idealistic lawyer – played by the famous German actor Alexander Scheer – and thanks to her witty simplicity of a proletarian mother, the woman goes so far as to face US President Bush at the Supreme Court in Washington. Determined to go all the way to defend the human rights of her son, she gathers around her, with her human energy, also a vast movement of opinion.

A lived story, which outraged the world (on the twentieth anniversary of the opening of Guantanamo, in 2002), becomes the material for an engaging action comedy, thanks to Kaptan’s explosive verve, for a compelling legal-thriller and a capable human parable to arouse laughter and tears, indignation and empathy.

Even rock star Patti Smith told the emblematic story of Murat Kurnaz in the poignant song “Without Chains” of 2006, a song that remains among the strongest folk ballads about injustice and the abuse of power.

According to Amnesty International this film recalls “the destruction of human rights committed in the last twenty years in Guantanamo, which must continue to be talked about until the infamous detention center is closed”.