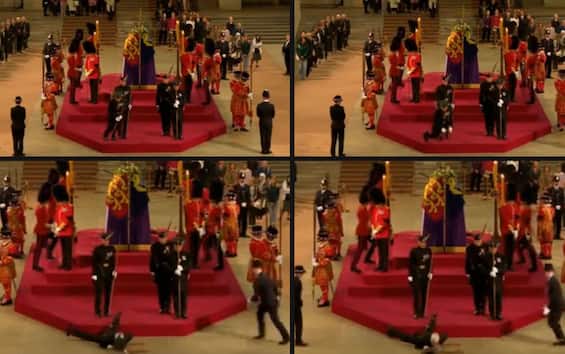 A Royal Guard is fainted during the public display of the coffin of the Queen Elizabeth II in the Palace of Westminster.

The moment was captured by the BBC cameras which are broadcasting a live streaming of the ceremony. In the video you notice man standing on the raised platform (bier) on which the coffin of the sovereign who begins at stagger, and then regain his balance by leaning on the staff of the ceremonial kit. It would seem a simple loss of balance, no one leaves their post.

Shortly after, however, the man falls face down on the stone floor. The attempt of the colleague who discreetly stretched out his arm to save him from falling was useless. The crowd, present to pay homage to the queen, gasps as two men in uniform rush to the guard to help. It seems that, at that point, the BBC interrupted the live broadcast for a few minutes.

Images are going viral on the web. A similar case had already occurred in 2016on the occasion of the parade for the ninety years of the sovereign. During the celebrations at Buckingham Palace, a Coldstream Guards, a foot guard to Her Majesty, had passed out from the heat and tension.

Less than a week after Elizabeth II’s death, the gates of Westminster, the seat of the British Parliament, were opened to the public on Wednesday 14 September to allow citizens to pay their respects, according to the traditional Lying-in-State ritual. For four days the coffin will be monitored 24 hours a day by members of the Sovereign’s Guard of the Household Cavalry, Foot Guards and King’s Bodyguards.