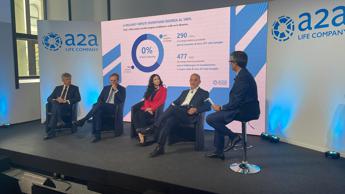 The sixth edition of the Territorial Sustainability Report presented

Over one billion euros is the economic value distributed in the Metropolitan City of Milan; 313 million euros invested in infrastructures and plants (+ 70% compared to 2020); 730 million euros of orders to local suppliers; 100% of the urban waste collected sent for material or energy recovery; 9 million kilometers driven with zero emissions thanks to the charging infrastructures for electric mobility; 444 thousand tons of CO2 avoided thanks to the group’s energy and heat production technologies. These are the numbers of the sixth edition of Milan Territorial Sustainability Report which reports on the environmental, economic and social performance of the A2A Group in the Milan area in 2021, as well as its business plans for the ecological transition in the coming years.


“Achieving the challenging objectives of the ecological transition requires resources and attention from everyone, and the results of this Report represent further confirmation of our Group’s commitment to a sustainable development model, in which the circular economy and innovation are at the service of territory – he says Marco Patuano, president of A2A – At a time like the present one, characterized by a complex geopolitical scenario and the energy emergency, A2A is confirmed as solid. In 2021 we distributed over one billion euros of economic value in the metropolitan city of Milan: the activities carried out demonstrate what it means for us to be a sustainable ecosystem model at national and European level“.

“Electrification of consumption and decarbonisation they are central elements in A2A’s industrial development plan, essential for achieving energy independence. Today, the concept of sustainability must also translate into a different way of generating and using energy, such as seizing the opportunities for efficiency that can be obtained from interventions on buildings and from the mobility sector – comments theCEO of A2A, Renato Mazzoncini – During 2021, we invested over 300 million euros in plants and infrastructures, implemented new projects to improve the electricity and district heating networks in Milan, started to recover 100% of the waste collected and avoided the emission of 444 thousand tons of CO2. Looking ahead, our goal is to further enhance the renewable resources present in the areato continue contributing to its sustainable development and create shared value for our stakeholders and for all local communities “.

In the province of Milan, A2A deals with waste management, the production, distribution and sale of energy and gas, the district heating network, services for the smart city, electric mobility and public lighting. Separate collection in the city and in the municipalities served in the Metropolitan City in 2021 exceeded 65%, reaching 62.4% in the city and 69% on average in the province. Of the total of over 816 thousand tons of municipal waste collected in the area, 64% was destined for material recovery and 36% was sent to waste-to-energy plants: no urban waste went to landfills, making the city one of the most virtuous examples of circular economy in Italy and Europe. Thanks to the waste, over 290 GWh of electricity were produced, equal to the average annual consumption of 107,000 households, and over 477 GWh of thermal energy, equal to the heating and hot water needs of 40,000 households.

In 2021 they were implemented new projects for the extension of the district heating networkwhich makes an important contribution to the fight against climate change: over 50,000 tons of oil equivalent (TOE), 125,000 tons of CO2, 28 tons of SO2 and 116 tons of NOx have been saved. At the Famagosta power plant, the construction of two thermal accumulations of 1,500 m3 each is underway, while in the Santa Giulia area new 100% carbon neutral districts are being planned. In addition, the heat deriving from the ‘Silla 2’ waste-to-energy plant was chosen to heat the buildings of the Fondazione Fiera and the Mico, against an estimated saving of 300 tons of CO2 per year. Finally, the project for the recovery of the heat that would otherwise be lost in the Gadio electrical substation was launched, with a thermal power of 420 kWt.

Investments continue to adapt the city’s electricity grid to new needs and facilitate the electrification process of consumption. In this sense, Unareti envisaged the construction of 10 new Primary Substations for the city of Milan and the voltage levels at 23 kV were unified to rationalize the network and reduce losses. Finally, the Unareti Smart Lab was planned in via Rubattino: a place for experimentation, monitoring and management of the electricity grid, which aims to improve the operating standards of the grid to make it more sustainable and effective with respect to local needs. During the year, 773 new people were hired locally, of which 43% were under 30 years of age. Also, in 2021 focus groups and training activities were promoted, such as awareness-raising initiatives for A2A employees with the aim of creating awareness on the issue of inclusion, gender harassment and the enhancement of diversity. The Group has formalized its commitment in this direction by publishing the Declaration of Commitment on the issues of Diversity, Equity & Inclusion. In 2021, more than 109 thousand hours of overall training were provided, of which 47,220 on health and safety, in agile mode.

In 2021 A2A supported the socio-economic development of the area by distributing over 1 billion euros (1,083 million) in the form of dividends, local taxes, orders to suppliers, fees and concessions, sponsorships and donations and remuneration of employees. Over 313 million euros were then invested in infrastructures and plants, with an increase of 70% compared to the previous year. 1,001 local suppliers were activated (+ 15% compared to 2020) for a total amount of orders equal to 730 million euros: 126 million euros (+ 30%) were invoiced to micro or small businesses with less than 50 employees and 1.4 million euros to social cooperatives and non-profit organizations. To support start-ups, a new streamlined and 100% digital process was approved as well as a real dedicated ‘start-up kit’.

A2A is at the forefront in Milan to guarantee services and promote activities that encourage sustainable development: there are 486 recharging points for electric vehicles and, in 2021, 90 thousand recharges were carried out at the columns in the Milanese Metropolitan Area, which allowed to travel 9 million km saving 972 tons of CO2, 50% more compared to 2020.

Yet. The Group extended the Amsa and A2A #Ambienteascuola project in 2021, involving about 1,700 students and professors participants to promote separate waste collection and civic and environmental education. Among the various training courses proposed by the Group to educate children about sustainability, of the 1,886 teachers throughout Italy who took part in ‘Towards 2050’ with DeA Scuola, nearly 200 came from schools in Milan. As part of the 2020-2021 call of the Banco dell’Energia Onlus, 160 thousand euros have been allocated for six projects in the province of Milan, in order to give rapid and coordinated responses to the population in poverty and vulnerability following the pandemic. Among these, 30 thousand euros were invested in interventions to support the citizens of Quarto Oggiaro, as part of the initiative ‘Energy in the suburbs‘. The AEM Foundation also supported the local community and in 2021 it continued to launch a series of cultural initiatives dedicated to photography, business culture, scientific research and specialist training.