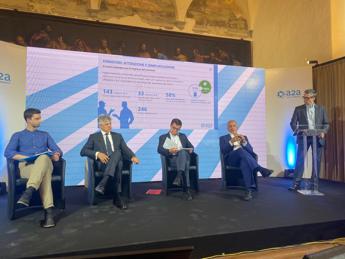 The president Marco Patuano, the managing director Renato Mazzoncini and the mayor of Bergamo Giorgio Gori were present at the event

The president of A2A Marco Patuano and the CEO of A2A Renato Mazzoncini presented today, in the presence of the mayor of Bergamo Giorgio Gori, the seventh territorial Sustainability Report of Bergamo, which photographs the environmental, economic and social performance of the Group in the Bergamo area in 2021 and its business plans for the next few years. The setting of the event is the Monastery of Astino, located in the homonymous Bergamo valley, built in 1107.


In the province of Bergamo, A2A deals with waste management, gas and electricity networks, public lighting, district heating, electric mobility and the sale of energy and heat. In 2021 the group’s activities generated 186 million euros of economic value distributed in the Bergamo area (+ 51% compared to the previous year) and 143 million euros of orders from local suppliers (+ 74% compared to 2020), with investments for the maintenance and development of plants and services equal to € 27.7 million (+ 51% compared to the previous twelve months).

In continuity with the path “The Territories of Sustainability“And in collaboration with The European House Ambrosetti, the presentation of the Report was preceded by a discussion with local stakeholders to identify, based on the results of the first round of meetings in 2021, concrete and” tailored “solutions to accelerate the transition environmental protection of the territories, also in light of the objectives of the A2A Business Plan.

During 2022 the stakeholder listening initiatives will continue in 8 other territories: Brescia, Valtellina and Valchiavenna, Friuli Venezia-Giulia, Milan, Piedmont, Sicily – already involved in previous years -, to which the stops in Puglia and Calabria will be added. .

“The attention and commitment of the A2A Group towards the Bergamo area, which have grown strongly in recent years, mark a further leap in quality with the 2021 financial statements, as evidenced by all the main indicators. The work and efforts of the more than 400 Group collaborators, distributed in our various operating companies in this area, are translated daily into works and services that make concrete what A2A means by ‘life company’: a company that takes care of people and the quality of their life and that does so by promoting responsible and sustainable growth”, Comments the president of A2A Marco Patuano.

“Our ambitions and goals are certainly global – continued the president of A2A – ma our heart and our roots remain local: thus today the link between A2A and the Bergamo area is renewed, which has generated numerous positive results so far and which in 2023 will be further strengthened and sealed by the initiatives in the pipeline for the year of “Bergamo Brescia Italian Capital of Culture”.

The CEO of A2A Renato Mazzoncini points out: “The 2021 results that we are presenting today in Bergamo make us proud and confirm the belief that the path taken is the winning one. In a year characterized by unprecedented volatility in energy prices and an economic and geopolitical scenario that has gradually worsened over the months, A2A has confirmed its solidity in the Bergamo area as well and has continued to grow “.

“The increase in some key indicators – added Mazzoncini – starting with investments in plants and infrastructures, and the consolidation of a policy aimed at the total recovery and valorisation of wastetestify in the province of Bergamo the commitment of the Group in promoting the culture of sustainability and the circular economy, as well as in the direction of a full ecological transition “.

In 2021, separate waste collection in the municipality of Bergamo has exceeded the share of 76%, with an increase of 3.6 percentage points compared to 2020: the best result among all the urban areas managed by A2A. The use of the new coded bags (with a numerical code associated to the individual user at the time of collection) – which can be collected from 17 vending machines – allowed to increase the percentage of separate waste collection in the city of Bergamo in a few months. 100% of the municipal waste collected was recovered: 74% destined for the recovery of materials and 26% used to produce electricity and heat, no urban waste was sent to landfills.

District heating is one of the A2A projects with the greatest environmental sustainability value in the area: the heat produced by cogeneration plants or by industrial and waste treatment processes is used to heat homes and other buildings. In 2021, 32,500 equivalent apartments were served, with a total of 215 GWht of heat sold, increasing last year’s values. At the Bergamo waste-to-energy plant, the construction of a storage system is underway, which will come into operation during the year and which will allow the storage of 160 MWh of thermal energy to be used when necessary.

The project involves an investment of 4.2 million euros for the construction of a steel tank, sized in such a way as to also be able to recover the heat that will come from the connection with the Rea Dalmine waste-to-energy plant. Furthermore, 93% of the electricity (78 GWh total in 2021) and 53% of the thermal energy (253 GWh total in 2021) is produced from waste. Thanks to waste-to-energy plants and cogeneration, the emission of 47,136 tons of CO2 was avoided.

The commitment that A2A undertakes to become a real Life Company translates into activities of listening, involvement and protection of the entire company population in all the territories in which it operates with the aim of contributing to improving the quality of life of people.

During the year, 35 new resources were hired in the Bergamo offices, of which over 30% were under 30 years of age. More than 7,000 hours of overall training were provided, of which 62% on health and safety. In addition, the trade union agreement was signed to set up the bilateral body for culture and leisure services, made up of the company and trade unions, in charge of the roles of direction and control of the area’s activities.

In 2021 A2A supported the development of the territory by distributing over 186 million euros, with a 51% increase over the previous year, in the form of dividends, local taxes, orders to suppliers, royalties and concessions and employee remuneration. Approximately 27.7 million euros were then allocated for infrastructure investments and plant maintenance (+ 51% compared to 2020). 246 local suppliers were activated and the amount of orders increased significantly (+ 74%) reaching 143 million euros, of which 33 million for micro and small businesses.

As part of the 2020-2021 call “We donate Energy”Of the Banco dell’Energia Onlus, a total of 2 million euros were raised for the year 2021, of which 500,000 made available by the Banco itself. Funds were disbursed for two projects in Bergamo: “TenacINsinergia – Reactivating energy after the pandemic“promoted by” Farsi Prossimo Onlus in the Upper Seriana Valley and Scalve Valley (BG) and “Let’s start from here“promoted by the Society of S. Vincenzo de ‘Paoli Central Council of Bergamo.

In the Bergamo area, A2A engages in activities that encourage sustainable mobility and digitalization. In the area there are 68 charging stations for electric vehicles that have supplied over 620,000 kWh of renewable energy, thus allowing 4.1 million kilometers to be covered with zero emissions. In 5 Municipalities of the Province, IoT (Internet of Things) services and technologies have also been developed: 6 interactive totems, 64 smart parking sensors, 88 cameras, 84 anti-intrusion sensors, 154 smart bin sensors, 111 wifi antennas, 28 pollution monitoring sensors environmental.

Finally, the “We are the energy!”Dedicated to lower secondary school children to explain and deepen the district heating system. The initiative offered the students a co-design path, together with expert ecodesigners, to tell the idea of ​​sustainable development of the neighborhood in which they live through the elaboration of creative sketches.