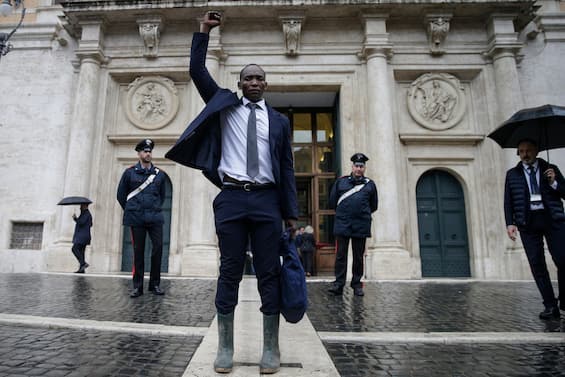 The expected clarifying meeting between the former trade unionist of the laborers and the leaders of the Alliance could arrive today. Fratoianni: “Just a direct comparison, then everyone will evaluate him”

The expected clarification meeting between the leaders of the Greens and the Italian Left and Aboubakar Soumahoro, elected with the left-wing coalition and, despite himself, in the limelight for the involvement of his mother-in-law and his wife in an investigation into the management of two cooperatives that deal with immigrants in the province of Latina. A meeting that the heads of the Alliance Nicola Fratoianni, Angelo Bonelli, Eleonora Evi and the group leader Luana Zanella deem necessary and which has so far been avoided by the former trade unionist of the laborers on the advice of his lawyers.

“In these hours, in these days, we will meet Aboubakar Soumahoro for a discussion” Fratoianni noted. “I – he continued – think that the judicial affair must always be kept distinct, very clearly, which, moreover, from what we read it seems that it does not even directly involve him and in any case the judiciary works on the judicial field” and then “there is the dimension of politics that concerns labor law issues, and on this I believe it is right to have a direct comparison. When we have had it, everyone will make some assessments “.

There is a certain nervousness

The atmosphere is certainly not relaxed. Within the Alliance we begin to point out that “Aboubakar says he is prostrated by this situation, but we are just as prostrate because we can’t understand, since he doesn’t want to talk about it”. And if officially the Alliance, while awaiting the meeting, continues to reaffirm its position regarding the affair (proximity to Soumahoro and full trust in the judiciary), what transpires is a certain nervousness, because legal responsibilities are one thing, I count those policies. “It is clear that Aboubakar personally bears no responsibility, from a legal point of view, for what his wife and mother-in-law did, but certainly from a political point of view – Avs points out – he must demonstrate that he was not aware not at all”