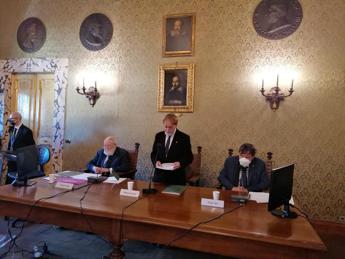 The president at the inauguration of the Academic Year joins the Nobel Parisi: “We need a new political awareness on research funds” and promises “more young members and more women”

“Science for science obviously remains the first mission for the Academy but also science for politics, society and economics, science for international cooperation and diplomacy”. He was the president ofAccademia dei LinceiRoberto Antonelli, to note it in his Report at the Inauguration Ceremony of theAcademic year 2022-2023 and during which he recalled the lincee celebrations “in honor of our award Nobel laureate Giorgio Parisi former president of the Academy. “Antonelli then associated himself with the Nobel linceo to relaunch scientific research on the historic theme of public funds.


The Nobel Prize in Physics Giorgio Parisi is “an Italian scientist particularly committed to promoting a new awareness of political power and public opinion on the importance of the importance of funding for scientific research for the future of Italy, as reaffirmed in the 2023-2027 Five-Year Plan ‘Science and Research: the engine of development’ promoted by Ugo Amaldi, Luciano Maiani and by Parisi himself and published on the website of our Academy “noted Antonelli.

The number one of the Academy also confirmed that the Lincei are changing pace on the presence of young people and women among the authoritative members. “After 20 years of unsuccessful attempts, we were able to approve a reform of article 4 in terms of the statute which we believe will help to better articulate the range of disciplines, also updating it, where necessary, and to favor a rejuvenation of the members and the presence of a greater number of members “Antonelli said, admitting that” although it has improved in recent years, the gender relationship within the Academy is profoundly unbalanced “.

Another theme touched by Antonelli in his Report was the large amount of funds that with the National Recovery and Resilience Plan is reaching the world of science, research and universities. “A large share of the NRRR, to an extent never recorded before, has been reserved for schools, universities and research. The first operations reserved for schools are now becoming operational, to which we will give all possible support”, the president pointed out. dei Lincei.