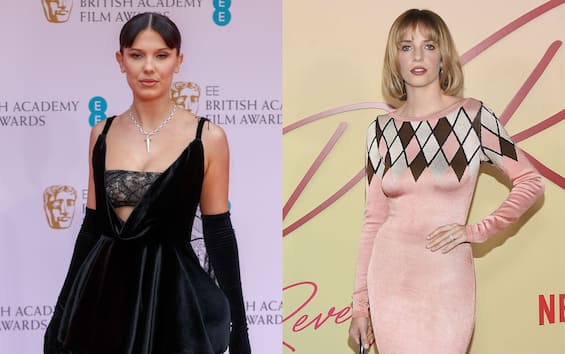 The song Running Up that Hill still resonates in our heads months after the end of Stranger Things 4 on Netflix (also visible on Sky Q and via the app on Now Smart Stick). The TV series set in the 80s that has an infinite fandome is preparing for the fifth season and Millie Bobby Brown who plays Eleven since the first episodes pointed out that she thinks in Stranger Things there are too many characters. And Maya Hawke, daughter of Uma Thurman and Ethan Hawke who plays Robin in the series, agrees with her colleague.

“I don’t think he should have died, but I think the show has too many characters,” Maya Hawke replied during a lie detector test with Vanity Fair talking about Eddie Munson, one of the characters entered in the fourth season and immediately a favorite of the fans of the series. Jokingly, Millie Bobby Brown had previously noted this by saying that if the cast were to take a group photo on the red carpet they would barely succeed. “The Duffer brothers are too sensitive to kill their characters, We have to do how Game of thrones”Said the actress.

The thought of the Duffer brothers

“We have explored all options in the writing room. If you kill Mike, it’s like … it’s depressing … We’re not Game of thrones. This is Hawkins, this is not Westeros, ”said Matt and Ross Duffer guests on the Happy Sad Confused podcast. As the creators of the series, the Duffers are fond of Hawkins and all the characters who live there or who have just been passing through. Surely for a TV series it always is risky to eliminate the protagonists most loved by fans, even if sometimes it takes some sacrifices for the good of the script. Who knows what will happen in the final episodes that everyone fear and desire equally.

Maya Hawke: I would like to have a hero’s death

Hawke said earlier this month that he would be happy if Robin was killed during the fifth and final season of the show currently in development. “Well, it’s the last season, so people are probably going to die,” the actress told Rolling Stone. “I’d like to die and have my hero moment. I would like to die with honor, as any actor would. But I love the way the Duffer Brothers love their actors. The reason they write so well for me and everyone else is because they fall in love with their actors and their characters and don’t want to kill them. I think it’s a nice quality they have, ”she added.