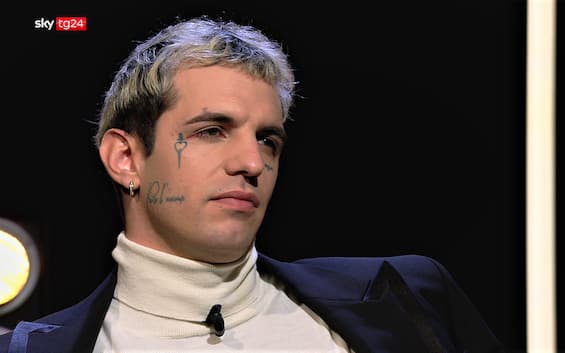 Achille Lauro is the protagonist of the new episode of “Stories”, the cycle of interviews with the main interpreters of the Sky TG24 show (THE SPECIAL). Guest of the magazine’s deputy director Omar Schillaci, directed by Roberto Contacts, the singer talks about himself in “Achille Lauro – C’est la vie”, broadcast on Saturday 3 December at 21 on Sky TG24 and always available On Demand. A new single just released and in the near future many projects, all different. In the recent past: a list of successes, participation in Sanremo, love for art, difficult childhood and the (won) bet on himself.

“What will be” is the title of his new song. “This new piece – explained the singer – is certainly an important restart. It speaks of the uncertainty of the future and also of an awareness in accepting life”. Among the projects in the pipeline are four live unplugged shows, announced and doubled in just 24 hours, in Rome on 22 and 26 January at the Auditorium Parco della Musica and in Milan on 24 and 25 January at the Teatro degli Arcimboldi. But there are many projects told in the chat that traces some of the stages of his life and career.

Starting from childhood: “Before I was 12 I lived in Rome with my family. Then for various reasons my brother and I were estranged and we ended up in a sort of commune. It was a boys’ house, so there was writing on the walls everywhere. The nice thing is that I absorbed so much from that period of my life, I was in contact with so many young artists, so many kids who sang, artists of all kinds, people who painted”.

“I must say – he added – that precisely in the difficult context where I come from, the extreme Roman periphery, it is clear that either it changes or it ends badly. I had clear examples of how I didn’t want to become that helped me become perhaps a better person”.

Then come the first important collaborations (“Marracash was the first together with DJ Shablo, who summoned me to Milan to offer me a management contract”), the musical contaminations starting from rap (“One of my peculiarities over the years has been changing every album. This is because I clearly feel the need to always do different things, I’m a very curious person and I’m also very bored.”). The turning point (“Thoiry” was really a moment in which I said “something has changed”) and the success with Rolls Royce (“I had this song for a long time and I thought it was a gem, a white fly, that had to be kept for a incredible situation. And so I took her to the Sanremo Festival. We worked for eight months day and night”). The creative universe at the “Domenica” Festival, the collaboration with Gucci, the works of art in Nft, the metaverse but also the project in schools that will start soon: “I wanted to do something that was close to people. In some way, tie the musical operation to something that was really helpful. The idea is to do a tour in schools, meet the kids and talk about orientation, the future, the importance of believing in what you do, the importance of knowing how to make mistakes, of finding what you like.Each of us is gifted for something, is made for something, he has to figure out what and pursue that path.”