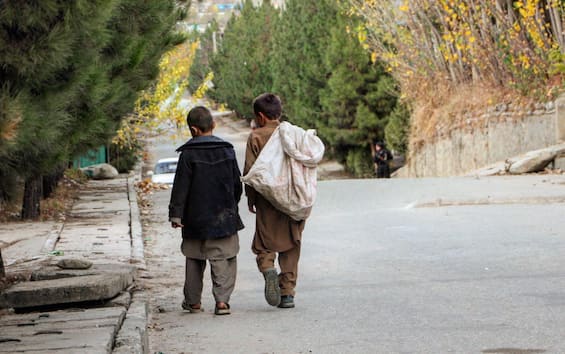 KABUL – The first thing that strikes anyone who returns to Afghanistan after some time is the amount of tiny children swarming in traffic. Many ask for alms, many offer themselves for small jobs, many others rummage through the garbage. It is a heartbreaking scene: they are dirty, obviously malnourished and have a vacant, watery, almost distant look, as if they had taken some drugs. But maybe it’s just hunger.

“Amrika? Amrika? Money! ” That’s what they shout as any foreigner passes by. There is no difference for them: all Westerners are Americans, rich, and responsible for their situation. Because it is true, childhood in Afghanistan, as in all poor countries, is very complicated and ends soon as soon as one is able to walk alone. But never had such an army of desperate little ones been seen begging for help.

The rise of the Taliban has led to a strong depletion of the population. Today about a fifth of families have been forced to send their children to work instead of school, and there are about 1 million minors across the country. But these are approximate figures, also because it is almost impossible to verify the data, which are certainly on the downside.

The merciless data of the economy

In the latest Save the Children report on Afghanistan, there are merciless data: 5 million children are on the brink of famine and the current economic crisis risks leaving more than 90% of the population in poverty, while the health system is collapsing. As families plunge into this abyss, one in 13 Afghans, about 7.5% of NGO respondents said they need to use alms or rely on the support of others to feed their loved ones.

Even in the central Chart – e – Now, the heart of Kabul’s green zone, children can be seen rummaging through the garbage for plastic that will be exported to Pakistan. It is difficult to quantify their earnings, but it never exceeds two dollars a day, and it is not sure.

The lucky ones get half a dollar a day

Those who have more luck are the children who have found a “regular” job, such as in car repair shops. Here the wages are lower, and the working hours are merciless: from dawn to dusk for half a dollar. They are “privileged”, because in fact they learn a trade and in the future, it is hoped, maybe they will be able to work. And in any case it is a certain gain. Modest, because it allows you to buy just four loaves of unleavened Afghan bread, but still a support for families who have lost their jobs with the rise of the Taliban.

In the residential neighborhood of Shah Baba Meena we go to see with our own eyes a workshop where about eight children are employed: the youngest is eight, the oldest is 14. They struggle on the engines and, thanks to their small size, they slip into in small holes dug in the earth to work under the machines. A little further on we see those used on construction sites, carrying huge bags of cement or struggling with wheelbarrows. Unfortunately, since the return of the students of the Koran the situation of childhood has worsened further, the economic crisis and drought have brought the country to the brink of a humanitarian crisis.

Save the Children’s appeal

The director of Save the Children, Chris Nyamandi, repeats the appeal that the international community does not abandon the country, which needs everything and that, if it does not receive the minimum it can, it would already be in collapse. Even if it is a scenario that is getting closer every day.