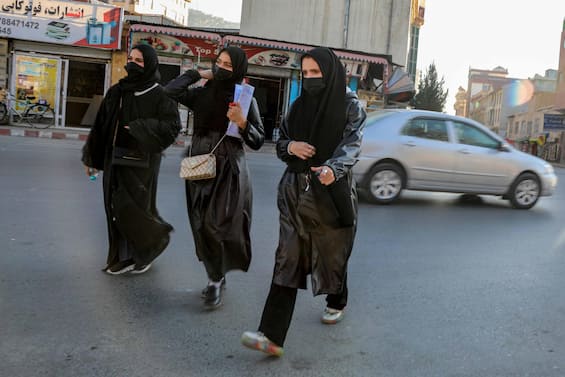 More restrictions on women in Afghanistan. After being banned from universities, the Taliban ordered all foreign and domestic NGOs to stop employing them. As stated in the order issued by Economy Minister Qari Din Mohammaed Hanif, the decision was taken after ‘serious complaints’ for not following the dress code.

“Failure to comply with Islamic hijab and other rules and regulations”

“There have been serious complaints about non-compliance with the Islamic hijab and other rules and regulations related to women’s work in national and international organizations,” said the ministry, which is responsible for approving licenses for NGOs operating in Afghanistan. The minister explained that he has received “serious complaints” about women employed in NGOs who do not wear the veil correctly. It is unclear whether the ban applies to all women or only Afghan women. The Afghan Economy Ministry specified that “in the event of non-compliance with the directive (…) the entity’s license which was issued by this ministry will be cancelled”.

Protest in Herat against expulsion from universities

Meanwhile, today in Herat, dozens of women demonstrated against the expulsion from the country’s universities. “Education is our right”, they shouted in the street divided into small groups, as one of them told the Dpa agency. Protesters gathered in front of the provincial governor’s office, but the Taliban then dispersed them using water cannons and batons. The Taliban have also increased their military presence in the capital Kabul, after dozens of women demonstrated against the recent ban on universities last Thursday. According to what was leaked at least one of the women demonstrating would have disappeared. The day before, the Taliban had banned women from university benches with immediate effect.

Even men are protesting against the banning of women from universities

Afghan men have also taken the field against the recent ban on women attending universities. A protest campaign was launched under the cry of “all or none”. The initiative has already seen some students leave the classrooms during the lesson or refuse to take the exams, in solidarity with their fellow students. Ajmir Sadat, the campaign manager, explained that it has started on social media and is spreading to the provinces. “Until our sisters can study again, we will also boycott men’s education,” he explained to local broadcaster Tolo News. According to a video circulating on social media, but the authenticity of which could not be verified, in Kandahar province, Taliban forces fired on students of a private university, who had left the classroom during exams. One person would have been injured.

From 2021 increasingly restrictive measures for women

Despite their pledges to be more flexible, after returning to power in 2021, the Taliban reverted to the ultra-strict interpretation of Islam that marked their first stint in ruling Afghanistan (1996-2001). Since August last year, draconian measures have multiplied, particularly against women who have been progressively excluded from public life and anyone who fights for their rights is routinely jailed, sometimes for several weeks.