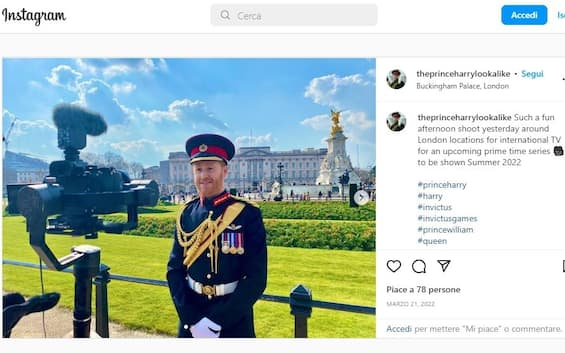 The Duke of Sussex’s book “Spare – the minor” came out a week ago and hasn’t stopped getting people talking. So many shocking statements, which are not unnoticed. Like the admission in one of the chapters that he killed 25 Taliban “like chess pieces” during his missions in Afghanistan. A statement that brings down a veil of concern because it could put Harry and the entire Royal Family at risk.

A concern that does not concern only the Windsor family, but also Rhys Whittock, 39, originally from Cardiff, a lookalike of Prince Harry. Such a resemblance that it becomes a job. The man has an instagram profile, @theprinceharrylookalike, where he can be seen in hundreds of photos dressed as a prince. “My mom texted me to make sure I was wearing sunglasses so I wouldn’t be recognized,” he told the DailyStar. Whittock is now fearful and fearful that he will become the target. “People mistake me for Harry every day, it’s worrying when you’re someone’s impersonator and you’re faced with a sudden increase in security threats,” she said. He added: “It should be clear to most people that I’m not the real Harry, but there are crazy people out there.”