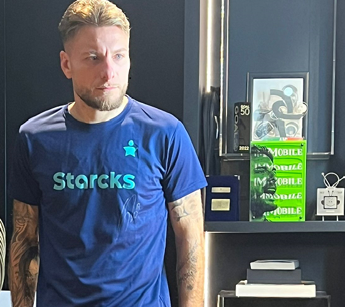 After the launch of Immobile, Frattesi and Bove Starcks, there’s no sign of stopping. On January 11, the free market will start and users will be able to exchange Star Player Tokens. The value of the Star Player Tokens will no longer be fixed but determined by the demand and supply of the community, exactly as it already happens for the Star Token or, in general, for any crypto. “Events such as a goal, the player’s performance on the pitch, market rumors or injuries will help define it. For example: if you imagine that a player is linked up with another team. The demand for his Token will most likely increase : more users will want to buy it than those who will be willing to sell it, resulting in an increase in the price. How will it work? Simple, all users who own Star Player Tokens will be able to put them up for sale at any time by choosing the price of the relative order which can be identical to the market one, higher or lower. Users who want to buy the Token instead will select the quantity and proceed with the purchase starting from the lowest orders and ending with the highest ones”, explain from Starcks.

“Let’s go back to the previous example. The demand for a player’s token is high because there is air of a transfer to a big club. Users will therefore be willing to pay a higher price to buy it by rewarding sellers who have chosen to place the relative upward orders. Everything will be very simple and intuitive. Both the purchase and the sales orders will take a few seconds thanks to a simplified interface, also completely revised compared to the current one. That’s not all. Others 4 tokens will be launched in the coming weeks and other novelties will be available. All this to increase the fun and to reward an ever-growing community”, concludes Starcks.