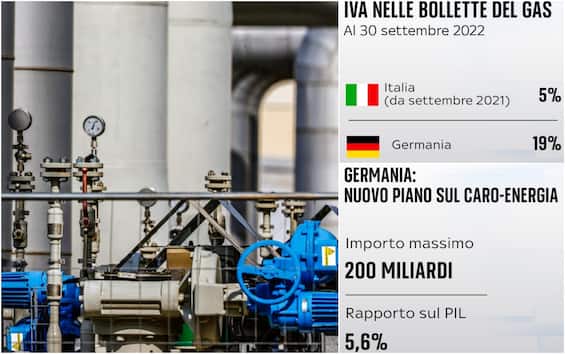 The increases in the cost of energy continue to worry Europe. As Brussels discusses how to move, many of the major Member States have decided to intervene at national level to help businesses and citizens. This is the main theme at the center of the last episode of “Numbers – After the vote”, the format of Sky TG24 broadcast from 18.30 to 19:00

Bills in Italy will increase by almost 60% for electricity in the last quarter of the year. At the beginning of November we will know how much gas will increase. How useful have the interventions put in place by the state so far been to contain the rise in prices? How are other European countries doing to cope with the increases? These are the main themes at the center of the episode of “Numbers – After the vote”, the format of Sky TG24 broadcast from 18.30 to 19:00. (THE SKY TG24 SPECIAL ON THE ELECTIONS – THE RESULTS – THE STEPS TO HAVE THE NEW GOVERNMENT – LIVE UPDATES).

The measures implemented so far by the Draghi government have managed to save Italian families 20% on the cost of bills: the remaining 80% remained and was borne by consumers. The Italians who have saved the most are those with the lowest ISEE income, recipients of the social bill bonus, a discount applied directly to the amount to be paid for those with an income of up to 12 thousand euros. For all the other families, the increase – on the protected market – without the executive aid would have been 860 euros. With the interventions the figure has dropped to 690 euros: it means that public aid has saved 170 euros for each family.

The deadlines for the interventions of the Draghi government

The measures approved in 2022 have been renewed from time to time by the government on the basis of a set deadline. At the moment, without extensions or further interventions, aid on bills should end on December 31st. Those to mitigate the price of fuels have an expiration date of 31 October, those approved to mitigate the impact of energy costs on companies would instead end on 31 November. It will be the new government, month by month, that will have to find the necessary funds to face the energy price increases.

The trend in the price of gas

The main cause for the rising bills remains the cost of gas on the Amsterdam market. In fact, prices for users now discount the peaks recorded in August, which now – while remaining on much higher figures than in the past – have now slightly reduced. If this downward trend continues we could look at a possible decrease in the cost of bills. According to Professor Michele Polo, a lecturer at Bocconi University in Milan, “the Amsterdam market – with very large fluctuations – reflects the trend of fundamentals. Anyone who talks about speculation as the only driver of the price trend does not grasp the true situation of the market. In this period, any news about the possible cut of supplies by Russia generates very rapid fluctuations ”.

Germany has recently announced a 200 billion euro plan against energy price increases. The figure corresponds to 5.6% of the national GDP. The figure is much higher than that invested for the same purpose by Italy. However, we must first of all take into account the size and number of inhabitants of the two countries: Germany has many more. But the issue is also economic. The German government can in fact count on public funds in better health than Italy. Berlin has a public debt that settles at around 69% of GDP, Rome reaches 145%.

In any case, as of 21 September, the money invested by Italy to help businesses and citizens struggling with energy prices and inflation amounted to 3.3% of its GDP. German investments, on the other hand, reached 2.8%. There are also measures that Italy has taken ahead of Germany. For months the VAT on gas in our country has in fact been set at 5%. Berlin has now decided to lower it to 9%, but so far it has been 19%.

The energy dossier on the Brussels table

A new European Council was held today to discuss the energy crisis. The day was actually an interlocutory one. De facto agreements have already been formalized in recent weeks. Among these is the decision to aim for energy savings of around 15% throughout Europe, to put a cap on the earnings of energy producers who use sources other than gas and to redistribute the recovered funds by taxing energy producers and reserving them for those who need them most. The point is that these measures will not, however, affect the price of bills. The energy ministers of the EU states will meet by videoconference as early as next Monday to think about new measures. On the sidelines of today’s meeting, Roberto Cingolani, head of our Ministry of Ecological Transition, said that we will now try to “reduce the peaks and excessive volatility of the gas price, trying to stay on figures that are not so low. energy operators to be discouraged “. It was therefore decided to “find a range between the minimum and maximum price that follows the laws of the market but is not out of control”, specified Cingolani.

Meanwhile, fifteen EU states, including Italy, continue to ask Brussels to put a ceiling on the price of gas. The discussion was not addressed in today’s Council. Several issues remain in the background: should the price cap be fixed only by looking at the gas arriving from Moscow or also from other suppliers? Italy, for example, currently only receives 11% of gas from Russia. Everything else comes from countries like Algeria and Azerbaijan. To impose a general price cap would also mean imposing smaller profits on these states than they are making. The risk is that they will look for new buyers.

Because electricity costs less in Spain and Portugal than in Italy

Looking at electricity, among the few European countries that have managed to lower their bills are Spain and Portugal. For years now, Europe has been calculating the price of electricity by comparing it to that of the most expensive source with which it is produced, which today is gas. Madrid and Lisbon have succeeded in obtaining from Europe the possibility of disconnecting from this mechanism. Thus, taking Spain as an example, bills today cost 40% less than those paid in Italy.