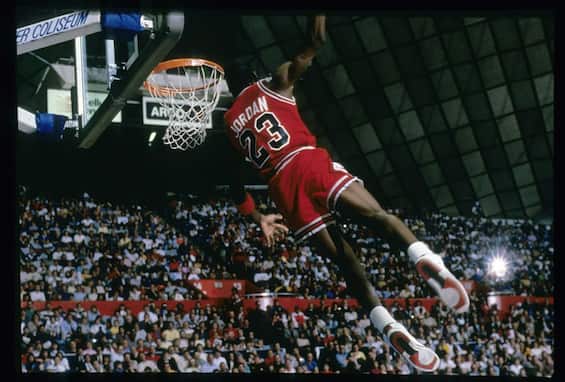 Today that the mustache of Nike it even appears on the uniforms of all the NBA franchises it seems hard to believe but, in the mid-eighties, the brand had not yet entered the world of basketball. At the time, the Beaverton-based company was famous for its running shoes, but it could not even dream of seriously entering a market where Adidas dominated, followed by other giants on the market long before the Swoosh, such as Converse and Rebook. Nike was still a young company and for this reason, in order to be able to shuffle the cards on the table, it decided to go all-in on a talent who was then entering professionalism: Michael Jeffrey Jordan. He will talk about how this partnership that changed the history of a brand and a sportsman forever Airthe new film produced and acted by Ben Affleck and Matt Damon in theaters from April 5.

Ben Affleck and Matt Damon arrive on the parquet

The love story between Nike and Michael Jordan has already influenced the history of cinema in some way, thanks to the commercials that helped launch the career of Spike Lee and they came up with the first idea for a classic like Space Jam. Yet there was still a film missing that told the story of this collaboration which at the time seemed almost a gamble on both sides. The couple of friends formed by Ben Affleck and Matt Damon took care of filling the hole, who decided to make Air the first project of their new production house Artists Equity. Not only that, the star couple also worked on the screenplay of the film, which will be able to count on the direction of Affleck and which will see the presence of both stars in the cast as well. We already know that the protagonist de The bar of great hopes in fact, here he will play the role of the co-founder of Nike Phil Knight while Damon will carve out the role of the executive who most pushed to have Jordan as a testimonial: Sonny Vaccaro. The cast will then be completed by other big names such as Viola Davis (as Michael Deloris’ mother) e Jason Bateman who will be another important man in the affair, Rob Strasser. Ben Affleck seems to be the most enthusiastic about the project and this is surprising up to a certain point. The author of Gone Baby Gone he is in fact a great basketball fan, so much so that he decided a couple of years ago to give a great acting performance in the role of a coach looking for redemption in Back to winning – The Way Back. “We can’t wait for audiences to watch Air. We have had the opportunity to work with some of the best professionals in this sector, and together we have created an inspiring story”, assured the star of Gone Girl.

The man who could fly (and made brands fly too)

The great absentee in the cast looks like Michael Jordan but, according to what was stated by the production, the choice not to include His Airness directly in the film was deliberate: MJ will be a “mythical figure suspended above the film and never seen”. it would also be difficult to find an actor capable of embodying such an icon, who also has a near namesake in the star (with no relation) Michael B. Jordan.In the eighties, when the North Carolina product entered the NBA after raging in college and even at the last Olympics, betting on him meant making a strong bet, with good margins of success but certainly not sure.Even in the 1984 Draft, the Chicago Bulls had chosen Jordan with the third call, after Houston and Portland had preferred to bet on the H centersakeem Olajuwon and Sam Bowie, a sign that not everyone had realized they were facing the strongest player in history. Yet Sam Vaccaro believed that boy was the right person to launch Nike “on the court” and get it into an increasingly popular league like the NBA. He was obviously right but, as the film will show, to realize his project he had to work hard to first convince the people within his company and then above all Michael himself. MJ dreamed of an agreement with Adidas and wouldn’t even have gone to the appointment with Nike if his mother Deloris hadn’t insisted on making him keep the commitment, even if only out of politeness. In the end, the contract was stipulated to everyone’s satisfaction during that same meeting, even though Nike had protected itself from any nasty surprises, inserting three clauses into the agreement stipulated with record figures for the time: Jordan should have won the rookie prize of the year, he should have been an All-Star or at least 20 points per game, and the footwear, in three years, should have reached at least $4 million. How did it end? That the number 23 of the Bulls that season averaged 28.2ppg, was directly called up for the All-Star Game and led Nike to sell 70 million in the first two months alone. It was the beginning of an extraordinary story, complete with initially banned footwear from the league and commercials featuring cartoon icons. The link between Jordan and the Swoosh is still existing today and seems indissoluble, after having made the history of the partnerships between the brand and the sport. The man who knew how to fly still today brings unthinkable heights in that 1984 to the company that most of all bet on him. Looking back, it’s really a movie story and Ben Affleck and Matt Damon must have thought of it too.