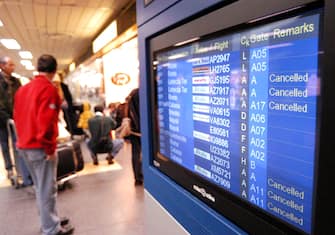 Lack of personnel, strikes, new fears for Covid. L‘summer of air traffic is going on in an emergency, causing numerous inconveniences to passengers between canceled and delayed flights. This is a situation that involves practically all of Europe: here’s what’s going on

WATCH THE VIDEO: Airport chaos, Enac: the system is holding up in Italy

UK – On 12 July, London’s Heathrow Airport asked airlines to stop selling tickets, when departing passengers exceed 100,000 per day, until 11 September. In reality, the airport management expects at least 104,000 per day for the summer peak, which has already been reached. But of the 4,000 in excess on the roof only 1,500 a day have already been sold: hence the request not to offer more

The CEO of HeathrowJohn Holland-Kaye, wrote an open letter to the passengers, apologizing for the “difficult decision”, dictated by the urgency of the boom in departures of vacationers, who have daily exceeded the limit of 100,000 per day. “We have begun to experience periods when the service expires at an unacceptable level. Our colleagues go out of their way to ensure the departure of as many passengers as possible, but we cannot push them to risk their safety and health.”

Summer 2022, risk of delayed or canceled flights: what to do to protect yourself

SPAIN – On Tuesday 12 July, a strike by Ryanair personnel created new inconveniences in air transport in Spain: yesterday numerous flights were canceled or delayed. In particular, the major problems concerned the airports of Barcelona, ​​Ibiza and Palma de Mallorca. Some flights involved connections to or from Italy (Milan Malpensa and Rome Fiumicino)

Air traffic in difficulty, still cuts and delays for flights: there is a lack of staff

Canceled and delayed flights: holidays for 7 million people at risk

ITALY – At the moment, the strike on Sunday 17 July of Ryanair pilots and flight attendants is confirmed, as reiterated by the unions after a meeting held on Monday at the Ministry of Sustainable Infrastructure and Mobility to take stock of the problems of air transport

Chaos flights, the Ministry recommends “travel only with hand luggage”. The prices of the companies

“To date, in the absence of concrete initiatives in the direction of improving working conditions and adjusting wages, the strike by Ryanair pilots and flight attendants remains confirmed on Sunday 17th“, said the national secretary of FILT CGIL, Fabrizio Cuscito, explaining that the acronyms have asked the Ministry” to convene a discussion with low cost airlines to verify compliance with the application of Article 203 of the Relaunch Decree on the application of minimum wages, provided for by the national air transport contract ”

As for the chaos that is affecting the airports of half of Europe with flight delays and cancellations, the unions expressed fears about the evolution of the situation in the coming weeks, especially in view of the great August exodus. “In Italy the situation in airports is less serious for now than in the rest of Europe” but “we have expressed our concern about how it will evolve given that in Italy the resumption of activity in the sector was later than in the rest of Europe” Cuscito explained

On Sunday’s strike, the consumer associations. For Codacons “is irresponsible“, will cause” enormous inconvenience “to citizens leaving for the holidays. It is” a real violence against users “, underlines the association asking for a confrontation with Mims, Enac and airlines.” It is right that the workers claim their rights, but blocking air transport during the summer is unacceptable “, says Assoutenti, asking for the intervention of the Guarantor and saying ready to “criminal complaints” to protect passengers

L’National Civil Aviation Authority in recent days, it has instructed airport managers “to rigorously and effectively activate all useful actions to ensure correct and timely assistance to passengers in case of delays and cancellations ”