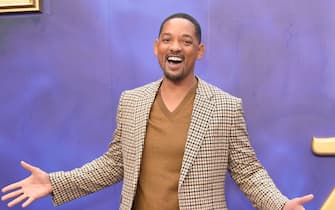 The first to enthusiastically participate in the project was Will Smith who, in Aladdininterprets the Genius

Watch the video: 7 curiosities about Will Smith

The Genie / Will Smith lives in a lamp, until Aladdin calls upon him to grant some wishes

Aladdin has the face of Mena Massaud, an Egyptian actor born in 1991 (he is Tarek Kassar in the television series Jack Ryanviewable on Amazon Prime)

Jack Ryan, the fourth season will be the last

Aladdin is a petty thief from the desert kingdom of Agrabah: an inseparable friend of the little monkey Abu, Aladdin makes friends with the enterprising princess Jasmine (who does not reveal her identity)

Jasmine is Naomi Scott, one of the protagonists of Terra Nova and in the cast of Charlie’s Angels

Allergic to rules, Jasmine won’t marry a man she doesn’t love. And, when Aladdin poses as a prince with the Genie’s help, he isn’t impressed

Dutchman Marwan Kenzari is Jafar, the Grand Vizier. The actor is best known for playing villain Sabbac in the film Black Adams

Watch video The Rock: “Black Adam” is not a priority for Gunn

Jafar, determined to gain power, tries to get hold of the magic lamp hidden inside the Cave of Wonders. His goal? Take the place of the legitimate Sultan

Navid Negahban is the Sultan

The actor has appeared in numerous TV series, he is best known for playing Abu Nazir in Homeland – Spy Hunt

Nasir Pedrad is Dalia. In her career she has held the role of nurse Suri in ER – Doctors on the front line. In Aladdin she plays the Sultan’s Handmaid

Billy Magnussen as Prince Anders. In 2014 he played the prince of Rapunzel in the film Into the Woodsfilm adaptation of the Broadway musical of the same name

Numan Acar is Hakim. He played Haissam Haqqani in the fourth and eighth seasons of the television series Homeland – Spy Hunt