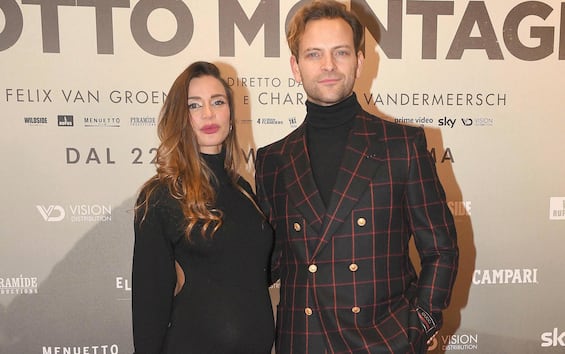 Alessandro Borgo he will soon be the father of his first child. In fact, the actor and his partner Irene Forti are pregnant, as “announced” at the premiere of the film The eight mountains.

An announcement that didn’t come through statements, but simply parading on the red carpet of the premiere of Borghi’s latest film, The eight mountains. Irene Strong she accompanied her partner to the event, sporting a form-fitting black dress with deep cut-outs that she put on with ease the belly is highlighted. The couple declined to reveal anything more about the pregnancy, which is believed to be in an advanced stage. It is therefore impossible to know whether Borghi will become the father of a boy or a girl, nor what will be the name of the unborn child. The actor and the model, linked since 2019, are extremely private. The Roman model, manager in the human resources sector, appeared in public for the first time with her partner in 2021 at the Venice Film Festival. “IT IS the most cultured person I know, devours four books a week – revealed the actor in a rare occasion of personal confidences – Which made me feel ignorant. Men alone have little chance to be interesting, they must always be accompanied, if they can, by a more interesting woman than them. Now I have it”.

Alessandro Borghi, his words about Irene

Alessandro Borghi spoke about his relationship in an interview with Corriere della Sera. A rare opportunity to tell your story not only from a professional point of view, but also from a private one. The actor told, among other things, about have Tourette’s syndrome. “Do you feel that sometimes I have a strange breath? They are spasms. It is a neurological syndrome, with various symptoms: I have spasms or blow on my fingers”. On the set, however, the spasms pass. “I gave myself a ‘poetic’ explanation: my job is to put myself in someone else’s shoes; la Tourette doesn’t have the other one and therefore, at that moment, neither do I”. Speaking of her partner, however, she declared in the interview that she was one deeply in love. “In my head, I have a thought of family as if it already exists. Desire I think is related to the kind of love I feel,” she said, thus expressing hers desire to expand the family, despite the many and understandable doubts. “Sometimes I have doubts because I don’t like what I see outside: I don’t understand if the act of selfishness is not bringing someone into the world according to your judgment or putting it there knowing the bad things out there. Then, when we talk about it together, she takes me back to planet Earth. She tells me: you ask yourself too many questions. You are right “.