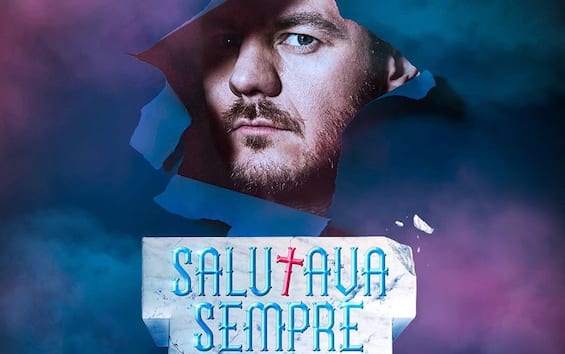 Alessandro Cattelan must not be a superstitious type, since he is about to inaugurate a new show with which he will bring his funeral to the theater. Well yes: the Piedmontese conductor has decided to end the year in style in which, among other things, he presented the Eurovision Song Contest and announced a new television program (Cattelan is there tonighthis TV show on Rai 2) launching himself into a new adventure “on the road”.

His very first theatrical tour, entitled He always greeted: it is a one man show produced by Live Nation (even if – given the theme – at least a partnership was expected with Taffo Funeral Services, the funeral agency famous for its brilliant, irreverent communication and whose claim should be “laughter will bury us “).

Cattelan will play with the trick of the afterlife, pretending to have passed from the nowhere to the other side of the rainbow. In this way he will be able to show all the contradictions and hypocrisies of the present day, finally making us open our eyes, who knows …

The debut is expected on November 26th, on the occasion of the zero date set at the Alexandria theater. We remember that Cattelan is very attached to Alessandria because it is his homeland, his homeland: the conductor is a native of Tortona, in the province of Alessandria.

This highly anticipated theatrical debut will be full of songs, jokes, reflections and moments in stand up comedy style, always making the talent that Cattelan has had the opportunity to show on several occasions in all these years of his rosy career the protagonist.
As proof of the aforementioned rosy career, just think that both the first two dates of the theatrical tour and the last are already sold out: for the November 26th stage in Alessandria and the following one on November 29th in Milan, as well as for the last date of 11 December in Bologna, tickets are no longer available.
But to meet the many Milanese fans of Alessandro Cattelan (who will also be from Tortona but is now also semi-adopted by Milan), another Milanese date has just been added: on November 30 at the Teatro degli Arcimboldi the conductor will repeat his presence theater in the Lombard capital.

“A truly special occasion, one would say unique, in which the public is invited to attend the funeral of Alessandro Cattelan and from here to leave to tell the follies, hypocrisies and small manias that distinguish our ordinary lives in the afterlife. aldiquà ”reads the official presentation of the show on the Live Nation website.
The highly anticipated theatrical event will be a mix of songs, stand-ups, show moments, jokes and interaction with the public in what promises to be a funeral party (which perhaps refers a bit to the Día de los muertos, the related Mexican celebration to the memory of the dead in which joy is an essential ingredient for the most colorful, colorful and joyful mourning recipe there is).

A tetral show to laugh, smile and even reflect

The goal of the show He always greeted is to ask together “what happens next?” and also “what to do first?” A one man show where the protagonist and host will tell us many things, with his unmistakable ironic and irreverent tone. His will be a look at a world of which he is no longer a part and where, with death, he has earned the privilege of total sincerity.

“Thank you for the trust!” wrote the show man on his Twitter profile when he announced a few weeks ago that some of the dates had already sold out.

You can watch the tweet shared by Alessandro Cattelan in the post you find at the bottom of this article.

All the dates of the play by Alessandro Cattelan

The TV presenter – here a theatrical host – will use the trick of his death to claim the right to comment on the follies and obsessions of the world of that now, those inconsistencies that many of us perhaps still cannot see the contradictions.

Below you will find all the tour dates: