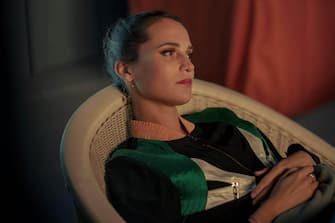 In the miniseries IRMA VEP – LIFE IMITATES ART, The Academy Award® Alicia Vikander as an American movie star who arrives in France to immerse himself in an iconic role.

Irma Vep, the trailer of the tv series

Against the backdrop of a crime thriller, IRMA VEP – LIFE IMITATES ART follows Mira Harber (Alicia Vikander), a major American film star disillusioned with her career and a recent romantic breakup, as she arrives in Paris to shoot Les Vampires, remake of the silent film of the same name centered on a gang of criminals and their femme fatale, Irma Vep. As the film director’s neuroses lead to growing tensions, Mira finds herself in trouble when the distinctions between her and the character she plays begin to blur and merge.

Irma Vep, the first photos of the tv series

Born in Gothenburg in 1988, Alicia Vikander can already boast the victory of an Oscar, obtained in 2016 for the film “The Danish girl”. Here we see it with l’iconic costume of Irma Vep, evil and charming muse

Watch the videos of the tv series

Alicia Vikander in Irma Vep, la sere exclusively on Sky and streaming only on NOW, also available on demand.

The daughter of a psychiatrist and a stage actress, Alicia grew up with her mother, as her parents separated when she was still a baby.

As a teenager she attended the Royal Swedish Ballet School, dreaming of becoming a professional dancer, but an accident prevented her from pursuing her career.

Driven by her mother’s work, she soon approaches theater and acting, taking part in some television productions.

The first film she participated in was “Pure”, a Swedish production that earned her the award for best actress at the Stockholm Film Festival and for best emerging star at the Berlin Film Festival.

After moving to London, she took part in Joe Wright’s “Anna Karenina”. In the film, the actress also has the opportunity to show off her skills as a dancer.

For Nikolaj Arcel’s film “Royal Affair” she is forced to learn Danish, which is used both on set and for interviews. Critics praise her for playing her and her name begins to roll.

After being noticed and appreciated by Martin Scorsese, Alicia Vikander is among the protagonists of “Son of a gun”, an Australian thriller with Ewan McGregor.

The best films of Alicia Vikander

In 2014 comes a starring role, in “The light of the oceans”, film adaptation of’homonymous novel directed by Derek Cianfrance.

On the set of the film, Alicia meets Michael Fassbender, starring in the film with her, and a feeling arises between the two.

The two actors got married in the autumn of 2017 in Ibiza, with a very armored ceremony.

Michael Fassbender and Alicia Vikander get married in Ibiza

For the honeymoon, Alicia Vikander and Michael Fassbender went to Italy, visiting Verona, Bologna and Florence.

At the same time as her film career, Alicia also joined that of model and testimonial, becoming a true style icon.

Currently, the actress is in theaters with Wim Wenders’ “Submergence”, based on’novel of the same name by JM Ledgard, alongside James McAvoy. Vikander is also a producer on the film.

In 2017, Alicia Vikander played Lara Croft in the Tomb Raider reboot. Before her, we had seen Angelina Jolie as the heroine.