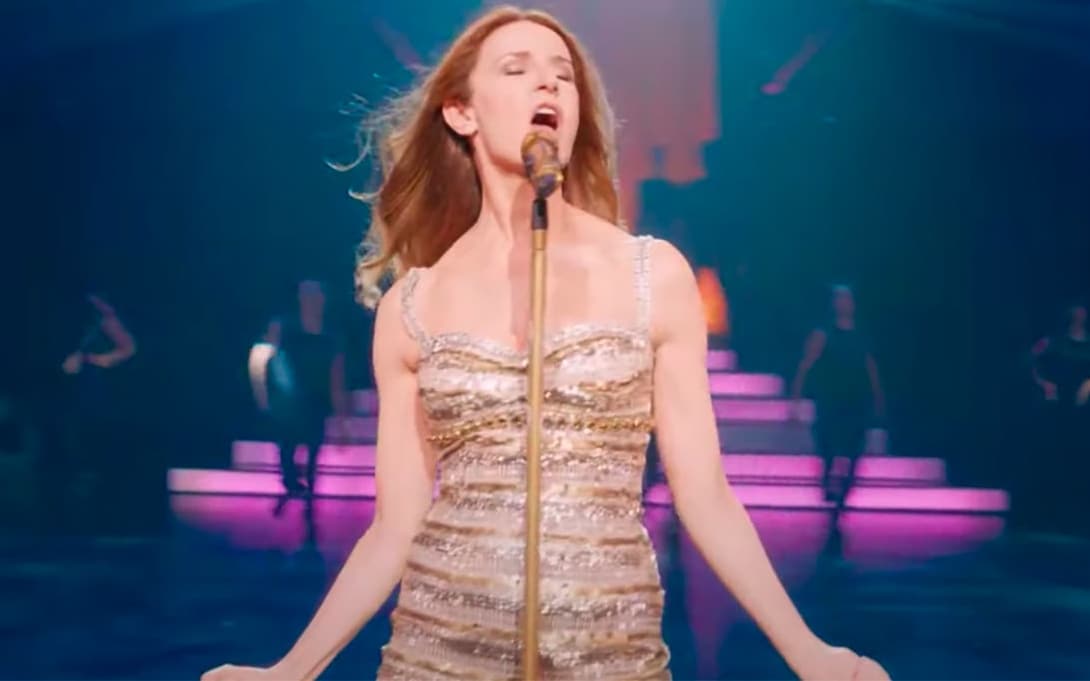 Coming to Italian cinemas, starting from Thursday 20 January, Aline – The voice of love, directed and starring Valérie Lemercer. Inspired by the life of singer Celi Dione, the film tells the story of Aline, a woman with an exceptional voice world. Supported by her family and guided by GuyClaude’s experience and then growing love, Aline will live an extraordinary destiny.

When my agent told me about Valérie’s offer, I thought she was kidding me. I figured if it was a joke, it wasn’t funny at all! But no: Valérie came to Montreal, it was her! I had done some research on the Internet: he was preparing a film about Céline. I felt relieved… and I was also very impressed. After all, Céline and René were the most famous couple in the world… I asked Valérie how she found me and the answer was funny enough: she typed “comedian” and my photo was the first to appear on the Internet. I came to Paris to do some screen tests and three days later Valérie phoned to tell me the part was mine. We celebrated quite a bit when I got home. In Québec, anything shot about Céline and René is either comic or parody. So when I read the script, I didn’t immediately understand what Valérie was trying to do. His response was electrifying: a love story. So I understood what my role would be. At first, during rehearsals, I imitated René’s deep, hoarse voice. Valérie immediately asked me to speak more clearly. I should have been Guy-Claude, not René. So I kept his slow moving and some other aspects of it – especially thanks to the incredible work done by the makeup artists and hairdressers – but I used them to play someone else: Guy-Claude, using my voice. This is one of the most important roles I have been offered in my entire career. I was under tremendous pressure, but living like a Parisian made me spend two very unusual months. It was also an opportunity to act with Québécois actors that I had only briefly met in Québec. It took a French woman to let us meet… in Paris! Valérie is a very friendly woman. Thanks to an agreement born immediately, we were able to recreate the intimate and loving relationship of the couple that we had to interpret. However, she is not an easy director with actors! He is such a perfectionist. Whenever we had to shoot a scene together and the camera framed me, she unwittingly moved her lips repeating my lines. It made me distract! But that’s normal: he wanted so much for the shot to work, and for the emotion to be palpable! And her reputation as an actress and director was at stake for such an important project.

Valérie found me through my agent and sent me four long scenes to prepare for an audition. It took me 60 hours to prepare for that audition! I worked on that text by turning it inside out like a sock, I read everything I could about Mrs. Dion. I had had a busy week of work, for some conferences and other commitments, and two days before the audition the order of the long monologue in which I ask Guy-Claude to let go of my daughter had been changed: the words were the same but put in a different order! I had to do all the work all over again. But I like to work, analyze a text … I taught acting for eight years at Québéc Film School, the equivalent of Fémis, and I also attended an acting school – the equivalent of Cours Florent in France – for thirty-one years . When I met Valérie it was love at first sight: we liked each other from the start. I’ve never felt anything like it for a director. Never. Instant friendship. At work I have a quiet disposition and I always want to get busy. I think Valérie was looking for a… solid mom who didn’t need to be reassured at all times. And he must have heard this from the very first audition. I had prepared myself so well that she was surprised by how much I had already delved into the emotional part of the character. I like being able to brag about my colleagues. Give them the right space, and Valérie’s talented enough to take up a lot of space! If I had to use a tennis metaphor, I’d say he can hit every ball! I also don’t get offended easily and I don’t consider criticism as a negative fact, on the contrary, I consider it a kind of challenge. And Valérie likes that. She is a perfectionist. Good for her. There is nothing worse than a director with confused ideas. In Québec we don’t have a lot of funding for cinema, nor a large audience of spectators, so we’re used to shooting quickly, albeit efficiently. Here, behaving well is essential, and an actor who plays badly or who doesn’t take things seriously is judged very negatively. We can turn forty-five pages of text in a single day. You have to be real professionals! Sylvain, who plays Guy-Claude, and I are old friends. In Québec we have often worked together. At the beginning of the shooting of ALINE, we couldn’t get over it: twenty-five takes for a single long shot! With us four takes are already the best. At first we thought that Valérie was not happy with us but then we realized that it was only due to her perfectionism.

I like surprising ideas, and ALINE is just one of them. A total risk faced with great honesty. Valérie represents Céline comprehensively. He has the accent, and he has a unique approach to history. I was delighted to have collaborated on this extremely personal project. Céline Dion is certainly our national monument, but the monuments are made to be viewed from different angles, which allows us to appreciate them even more. The fact that Valérie is French was an advantage. First of all, I liked to change physically to play Jean-Bobin: a mask of Valérie’s face was made, then applied to my face. I was probably much cuter! Actors always love this kind of transformation. It helps them feel like someone else. As filming progressed, Valérie seemed to appreciate my unobtrusive presence in the supporting role of her older brother, and so she decided to give me a little more screen space than was expected in the script. He then offered me a few more scenes and I was pleased to feel useful. She referred precisely to the real facts, because Céline’s brother has always been by her side, while remaining in the shadows. It is obvious that Valérie was always very busy, because she had many roles to play, but still she found the time to have fun with me between takes and she also gave me an address where to find a good pain au chocolat in Paris. . She was so cute that she never made us feel the pressure she had on us. As an actress, the moment she started acting she immediately gave 100%. I never imagined that one day I would act with her, and I have to say that it is much easier to work with a great actress. It’s like a racing car, you can trust it and you end up expressing yourself at its level.

The words of director of photography LAURENT DAILLAND

Valérie would have liked to work with me on her film OUR SON HAS ARRIVED but I was not free. He kindly offered it to me again for MARIE-FRANCINE, on whom I worked, and now for ALINE. Edouard Weil, the producer, wanted me to be part of this adventure. He had texted me a lot in advance and so it worked out in the end! I put a big red cross on my schedule to avoid disappointing the manufacturer’s trust! Because I earned Valérie’s trust on a double front during the filming of MARIE-FRANCINE: the one between the director and the DOP, and the one between the actress and the DOP. In our profession one of the greatest responsibilities is to illuminate the star well! Valérie goes to the cinema to see whatever movie comes out and at first I thought she was looking for me for the special attention I put into enlightening my actresses. She thought she looked good on screen in MARIE-FRANCINE, but the challenge in ALINE was definitely more difficult. He was supposed to play an international star, and play her from early childhood until she is now in her fifties. I had to work closely with many good special effects professionals. The film’s history spans over forty years but Valérie didn’t want anything excessive to be used, like changing the grain of the image to create a “vintage” or “in the style of …”