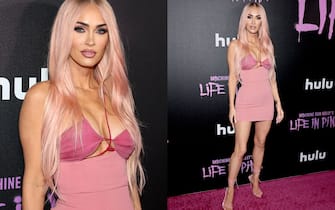 The roseof great trend in the last season, it is now the sovereign tonality of the life of Megan Fox increasingly in love with Machine Gun Kelly who recently presented the documentary to the public Life in Pink. For the premiere in New York, the actress honored her boyfriend with a minidress with Nensi Dojaka lists and a new hair color, blonde with pink shades, in harmony with the look of the singer who recently wore a hair tending to fuchsia

Set aside the phase of his life characterized by soft colors much loved by Kanye West, Kim Kardashian has given a chromatic change to her wardrobe which for some time has been full of Balenciaga total looks designed by her designer friend Demna Gvasalia. This dramatic bubble gum pink creation will forever be associated with the entrepreneur’s participation in Saturday Night Live in the fall of 2021 during which she apparently began dating Pete Davidson.

Pink is one of the trademarks of his brand e Chiara Ferragni, a lover of pop colors, she wears it almost every day. Difficult to choose her best pink outfit of the season but, of all, the Versace minidress with shaped bustier worn for the Met Gala after party certainly deserves a prominent place

Chiara Ferragni sells the house in Los Angeles: photos of the villa worth more than 2 million euros

Khloe Kardashian she has definitely embraced the pink fashion she has worn on many recent occasions, including her birthday. Even the collection of trousers including her, Good American, this year has been enriched with proposals in pink like this model in coated and reflective fabric, truly irresistible

On the big night of MTV Movie & TV Awards in which he took home several awards, Sidney Sweeney was the most photographed with her look inspired by the looks of teenagers of the early 2000s. Both the top and the low-rise skirt were made for her by Miu Miu

As the face of Maison Valentino, Zendaya Coleman was one of the first to wear in public the vibrant pink shade designed by Pierpaolo Piccioli for Fall Winter 2022-23 renamed Valentino PP Pink. The energetic pink single-color dresses designed by the Italian designer have been the protagonists of the most prestigious and photographed red carpets in the world in recent months

She wore Valentino dresses – three, all different but of the same color – Laura Pausini who adopted a monochromatic style for the conduct of the first evening of the Eurovision Song Contest, in Turin last May. With such a bright color she dominated the stage as a true queen

The PP Pink Valentino is not just for women, quite the contrary. This was demonstrated by Pierpaolo Piccioli who designed many looks for important occasions for the stars of music and the world of entertainment. This is Sebastian Stan host of the Met Gala 2022

Yet Sebastian Stan chose pink for the premiere of Pam & Tommy, a show that saw him star this year on streaming TV. His velvet look is by Dolce & Gabbana

Pink and super original, the dress chosen by the model Jeanne Cadieu, in Cannes in a Loewe total look

All tulle look, always on the Cannes red carpet, for Leonie Hanne which stopped for photographers with her creation Nicole + Felicia Couture

Another pink dress for a special event, the AmfAR Gala in Cannes last May where Claire Holt came with a creation by Nicolas Jebran

Chic and trendy, Marcia Gay Harden she presented herself with this wonderful Oscar de la Renta creation at the latest Tony Awards

A Dolce & Gabbana suit in the color of the moment. This is the look of Lupita Nyong’o in front of the public at the Breaking Barriers and Building Community event in Cannes in June

Not even the Oscar winner Penelope Cruz withstood the Barbie Mania complete with a tone-on-tone beauty bag. This is her look for the Art Dinner organized by Chanel within the recent Tribeca Film Festival

In this roundup of pink dresses, Barbie inspiredcan not miss her, Margot Robbie, chosen to impersonate the Mattel doll in flesh and blood. Here is a shot stolen from the set of Greta Gerwig’s latest film which is already one of the most anticipated titles of next season

Barbie, in one scene the character of Margot Robbie responds to the harassment of a passer-by