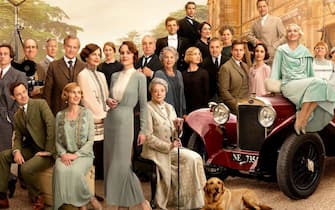 The best-known TV series scripted by Julian Fellowes is Downton AbbeyBritish costume series set between 1912 and 1926, during the reign of King George V, on the fictional estate of Downton Abbey

In 2011, Downton Abbey entered the Guinness Book of Records as the most critically acclaimed show of the year (never before has a British series achieved recognition)

His debut in the series was actually with Julian Fellowes Investigates: A Most Mysterious Murdera docudrama that brought five unsolved British news cases to the small screen

The Gilded Age, on Sky and NOW the new period drama by Julian Fellowes

In 2012 he produced the television miniseries Titanic, broadcast on home video on the occasion of the centenary of the shipwreck. The miniseries tells the life of the passengers aboard the ship in a fictional way, some invented and others actually existed

The Gilded Age: cast of the TV series broadcast on Sky

Period-drama, Doctor Thorne is the television adaptation of Anthony Trollope’s 1858 novel of the same name

Set in the 19th century and based on Julian Fellowes’ 2016 novel of the same name, Belgravia kicks off on the eve of the battle of Quatre-Bras, two days before the battle of Waterloo

In The English Gamethe owner of Darwen FC decides to secretly pay two Scottish footballers, Fergus Suter and Jimmy Love, to strengthen the team for the quarter-finals of the 1879 FA Cup

His latest work for the small screen is The Gilded Agethe series tells the story of Marian Brook, orphan of a Southern general who moves to her aunt in New York

Accompanied by the mysterious Peggy Scott, an African-American woman disguised as a maid, the girl becomes involved in the tempting lives of the wealthy family who live in the house next to her.