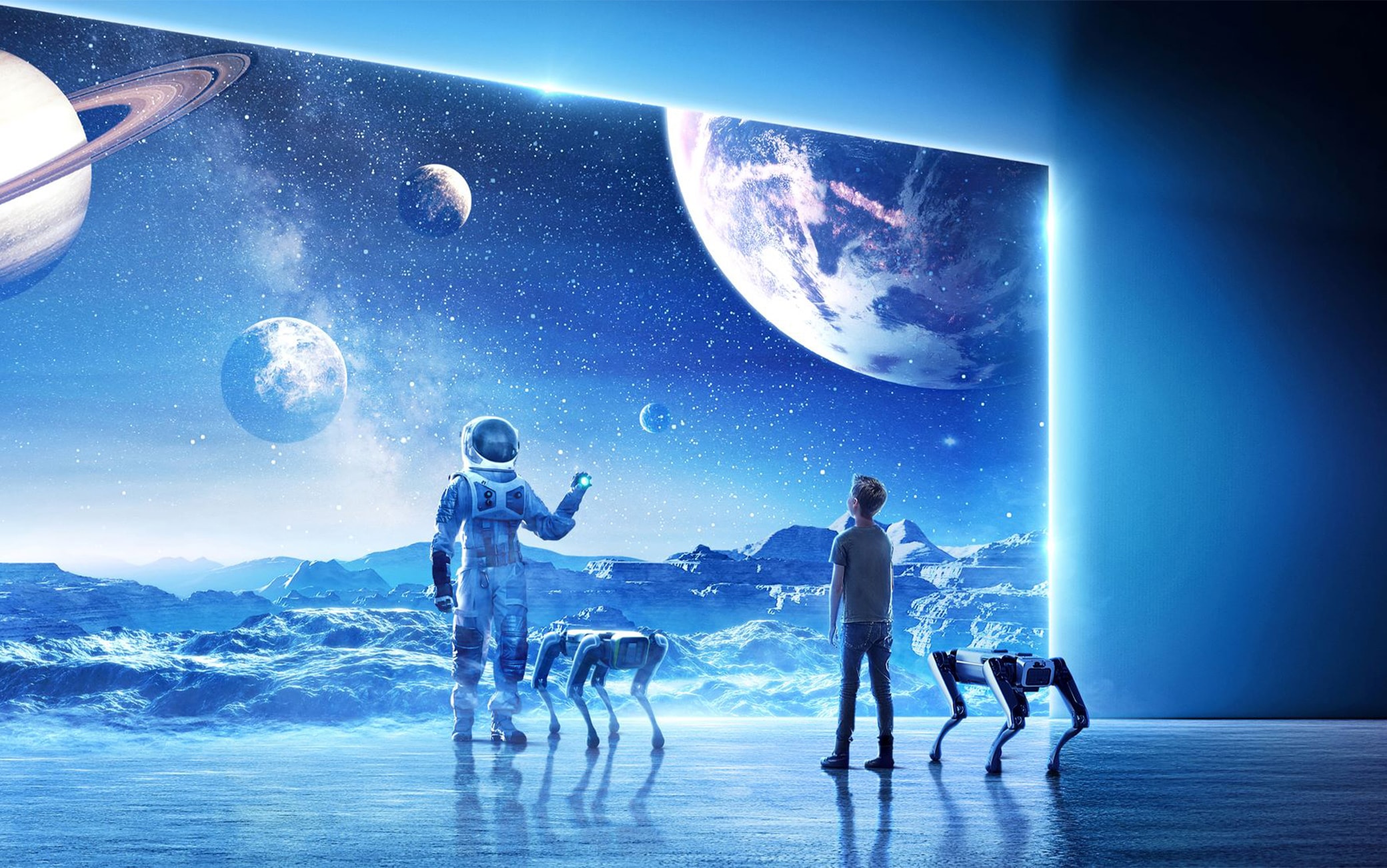 Despite this edition of CES, the world electronics fair held every year in Las Vegas, there is a small number of visitors and companies (especially the most famous), there are many interesting proposals from the big names, from Samsung to Sony, from LG to Hyundai, from Netgear to Garmin (just to name a few): Ideas and products that, as always, will mark the technological trends of the year.

Samsung is the largest company that has decided not to leave the fair but, on the contrary, to focus everything on physical presence, announcing many new features, both hardware and software. During the opening keynote, Samsung unveiled its vision “Together for tomorrow”, which “aims to encourage positive change and stimulate collaboration in responding to the most pressing problems on the planet”: a vision entirely aimed at sustainability and a smaller environmental footprint. . The interesting Solar One Remote remote control goes precisely in this sense, which is recharged both with sunlight and – new – with the radio waves emitted by home Wi-Fi routers, thus eliminating the use of batteries. Other noteworthy products include The Freestyle, a lightweight and portable projector that guarantees an audio-video cinematic experience wherever you are, and Odyssey Ark, a curved gaming monitor that offers an extraordinary level of immersion. The personalization options of the Bespoke household appliances line were updated while new and increasingly intelligent connection functions were presented between the appliances in the smart home. Smart TVs are updated, both from the point of view of viewing quality and from that of furnishings: in fact, the new versions of The Frame televisions are born (those, to be clear, that hang on the wall and look like a painting), of the iconic The Serif and The Sero, the TV with a motorized screen capable of rotating 90 degrees based on the content we are viewing. Among the many technological innovations, here are the MicroLEDs: it is a state-of-the-art television display that offers even greater image quality thanks to 25 million micrometer-scale LEDs that individually produce light and color. The Smart Hub platform is also updated, which takes care of proposing and curating content based on user preferences, thanks to the introduction of Gaming Hub, a gaming control center now also compatible with the Stadia and GeForce Now streaming platforms. Awaited by many users, finally, comes the new smartphone, Galaxy S21 FE: compared to the traditional S21 it costs a little less and has updated functions.

There are also many launches by the Japanese electronics giant Sony, which as always focuses on audio-video. Starting with the new Bravia XR televisions: thanks to a proprietary technology, XR Backlight Master Drive precisely controls the Mini LED backlight system ensuring excellent levels of brightness, with deeper blacks and more intense light points. Audio technologies have also been improved, able to accurately match the position of the sound with the images on the screen. Sony’s innovations also include a new electric vehicle prototype, Vision-S, and the announcement of the creation of a new subsidiary, called Sony Mobility, through which “to explore the possibility of investing in the electric vehicle market”. Finally, Sony announced PlayStation Productions, a collaboration between Sony Pictures Entertainment and Sony Interactive Entertainment to produce IP-based movies and TV series PlayStation and the next-generation virtual reality system PlayStation VR2 along with new controllers that will deliver an even greater immersive feeling. in the world of video games.

LG: upgradeable appliances and the future of smart working

As always, the South Korean LG brings a lot of news to CES under the motto of “The Better Life You Deserve”, with the aim of improving every aspect of daily life through technological innovation and design. The protagonists of the LG innovations are the “upgradeable” appliances, which thanks to the ThinQ proprietary platform can be enriched with advanced features, entertainment solutions that are increasingly personalized and sewn around the spectators thanks to operating systems and screens (such as the LG OLED evo Gallery Edition TV ) that combine image quality with brightness and an elegant form factor. LG StandbyME, on the other hand, is a portable and wireless TV that can move around the house with ease. LG also focuses heavily on household appliances, with integrated solutions for air purification, cooling and heating, and on the use of packaging and recycled materials. The LG OMNIPOD concept is also very interesting: a sort of road extension of one’s home environment, a look at what it might be like to live in a future where working remotely does not necessarily mean working from home.

The future according to Hyundai

The Japanese Hyundai brings the future of robotics and the metaverse to CES 2022 under the concept of “Expanding Human Reach”: for Hyundai, they explain to us, robotics and mobility together will drive progress for humanity, starting from the MoT ecosystem (Mobility of Things) in which even normally inanimate objects will be equipped with mobility, using the robotic technology of the company, which has acquired the innovator Boston Dynamics. In the future, according to Hyundai, in the metaverse – destined to become a daily living space for people – it will be possible to use robots as a means to connect the real world and the virtual world, allowing people to change and transform objects in the real world.

Panasonic and the future of car navigation

Among the most interesting innovations of the fair, the Panasonic OneConnect vehicle monitoring system: it is a system with augmented reality technology that “enters the car” providing information on the road ahead, the dangers, the other vehicles. It is a sort of fully automated navigator integrated directly into the windshield that helps the driver without distracting him and that, thanks to artificial intelligence, is able to predict dangers such as a car with a tired or distracted driver.

Acer: here are the new PCs

At CES 2022 Acer is betting a lot on Chromebooks, the cheap (but powerful) laptops with Google’s Chrome OS operating system that are so popular, especially for smart working and remote teaching. The company presented three new models (Acer Chromebook Spin 513, 315 and 314) equipped with the latest audio-video technologies and particularly suitable for entertainment, video conferencing and remote work. There are also two new devices that enrich the Swift X line of ultra-light laptops, new all-in-one PCs from the Aspire line and an update to the Predator and Nitro line of gaming laptops.

Hisense is betting everything on the Laser TV

HiSense, one of the world leaders in the field of televisions, has also announced two important innovations: the ULED 8K Mini-Led series and the world’s first 8K resolution Laser TV: both promise excellent performance with better contrast and brilliant colors. The first 8k Laser TV, in particular, is aimed at the many consumers who appreciate enjoying content on large displays: the company leads the global industry and introduces novelties and better performances in its products, which promise an extremely realistic detail and depth. of the images.

Asus Rog: the world of gamers

Lots of news for gamers also from Asus Rog, which in The Rise of the Gamers event announced new gaming devices including powerful gaming laptops equipped with the latest chips (including Zephyrus Duo 16 with dual display) and new peripherals (including headphones, mouse, monitor) to maximize gaming experiences.

Netgear, a leading company in specific products for internet connections, presented the new Orbi Pro WiFi 6 system: it is the first Mesh WiFi system with the new super-fast and super-reliable WiFi 6E technology. From the Californian company also arrive the new Nighthawk Wifi 6E Tri-Band router, which uses the interference-free 6GHz band to provide ultra-fast connections capable of reaching surfaces of over 200 square meters in a stable manner, and Netgear Game Booster, a dedicated service package to Orbi owners: software designed for the gamer community able to guarantee an always performing network.

Jabra, a Danish company specializing in audio technologies, has presented new earphones, the Elite 4 Active, which are aimed at a particularly dynamic audience, with an active lifestyle: in fact, they allow intensive use with a resistance to water and to sweat and an ergonomic and safer fit, while ensuring a battery life of up to 7 hours.

From Garmin arrive two new smartwatches ideal for monitoring your health and sports activities. Perhaps the most interesting is in our opinion vívomove Sport: a hybrid smartwatch with analog hands that hide a monochrome touchscreen, designed for those who love to always stay connected without giving up a classic style. The other model, Garmin Venu 2 Plus, has built-in GPS, can make phone calls, is compatible with voice assistants, and has many health monitoring features including sleep, stress and body energy, pulse oximeter, and a battery that lasts up to nine days.

TP-Link announces the expansion of the range of routers and the Deco line, with the new Archer AXE200 Omni model that supports the new super-fast Wi-Fi 6E standard and the Deco range with Deco XE200, Mesh Wi-FI system with Wi -Built-in Fi6 which ensures a stable connection throughout the home.

JBL: microphone and headphones for gamers

JBL presents the expansion of its gaming portfolio with new devices from the JBL Quantum line: among these, there is the new JBL Quantum Stream USB microphone, dual condenser and ideal for team games. Also arriving are the first JBL Quantum TW5 true-wireless earphones designed specifically for gamers, combining surround and noise canceling capabilities to minimize distractions when gaming.

Staying in the gaming sector, the NVIDIA product family is expanding, unveiling more than 160 Studio GeForce laptops coming to world markets, all based on the NVIDIA Ampere architecture, new technologies and GeForce RTX GPUs for desktops and laptops. Among the news also the arrival of GeForce RTX 3080 Ti for laptops and the RTX 3050 card for desktop.

Dell unveiled the XPS 13 Plus, the first XPS 13 designed for a 12th Generation Intel Core processor, supported by larger fans that don’t increase noise and temperature. Among the novelties, in addition to a very elegant form factor, a row of virtual keys that offer a touch interface to the most used commands and a glass touchpad capable of providing precise reactions.