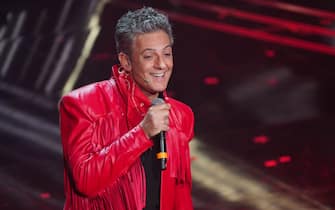 Among the guests of Tuesday 1 February we find Fiorello. The Italian TV showman, already involved in conducting the 2020 and 2021 editions, returns to the Ligurian stage to give the public his extraordinary gags

WATCH THE VIDEO: Sanremo 2022, 8 best moments of the first evening

Claudio Gioè. The Sicilian actor is at Ariston to present the new series Makari directed by Michele Soavi on air from Monday 7 February

WATCH THE VIDEO: Sanremo 2022, partial ranking after the prime time

Colapesce and Dimartino. The duo of Very light music performed live re-proposing the success of Sanremo 2021 from the stage on the water set up on the cruise ship Costa Toscana

Sanremo 2022, the Måneskin are back on stage. Fiorello show. VIDEO

Maneskin. The band that triumphed last year returns to the Ariston eleven months after the victory by proposing again Shut up and good to celebrate a season of extraordinary international success

Matteo Berrettini. The tennis player, sixth in the ATP ranking, was one of the guests of the Festival from the world of sport, an area very dear to the artistic director Amadeus

Matteo Berrettini in a tuxedo in Sanremo 2022

Meduza. The group made up of the three producers Simone Giani, Luca De Gregorio and Mattia Vitale did dance with Hozier for the song Tell It To My Heart

Sanremo 2022, the most beautiful dresses of the early evening. PHOTO

Nino Frassica. The actor was at Ariston together with Raoul Bova to present the new season of Don Matteo in which he has had a recurring role for many years

Raoul Bova. The actor took the stage of the Ariston Theater to present himself to the public as the main interpreter of the fiction Don Matteo 13 broadcast after Sanremo

There second eveningscheduled Wednesday 2 Februarysaw among the guests Checco Zalone. Among the most anticipated guests of the event, the actor and director took the stage of the Ariston for the first time.

WATCH THE VIDEO: Sanremo 2022, 5 best moments of the second evening

Ermal Meta. The singer-songwriter connected with the Ariston from the stage of the Costa Toscana ship for a moment of live music

WATCH THE VIDEO: Sanremo 2022, the ranking after the second evening

Laura Pausini. Fresh from a triumphal season, after the Oscars and the Golden Globes, the singer presented her new single entitled Boxwritten with Madame, artist competing last year.

Sanremo 2022, the most beautiful dresses of the second evening, from Emma to Elisa. PHOTO

There third eveningscheduled Thursday 3 Februarysees among the guests Cesare Cremonini. The Bolognese singer-songwriter, super guest of the event, on the radio with the single Hummingbirdwill retrace the successes of his twenty-year career in Sanremo in an unforgettable moment of music

Sanremo 2022, here are guests and singers competing in the third evening

Roberto Saviano. The writer will speak at the event for a moment in which he will talk about the thirtieth anniversary of the Capaci massacre. He specified to participate as a free guest

Drusilla Foer, who is the host of the third evening of Sanremo 2022. PHOTOS

Anna Valle will take the stage to talk about his new fiction, “Lea – A new day”. A fiction that will see her in the role of a nurse with sneakers, as you said yourself

Gaia will be on board the ship in place of the Coma Cose, which tested positive for Covid-19. Together with her, Fabio Rovazzi and Oriella Berti

Martina Pigliapoco is a young carabiniera who, on 4 October last, saved a woman who wanted to throw herself, due to economic problems, from a Tibetan bridge in the province of Belluno. In Sanremo she will bring her story

There fourth eveningscheduled Friday 4th Februarysees among the guests Andy from Bluvertigo (duet with Giusy Ferreri). The former member of Bluvertigo returns to Ariston to accompany Giusi Ferreri in I will live without you by Lucio Battisti

Arisa (duet with Aka7even). The veteran of the Sanremo stage will accompany the young debutante face of “Amici” in the song by Alex Baroni Change

Caliber 35 (duet with Rkomi). The competing artist will be busy with the guest band with a medley of Vasco Rossi’s most famous songs

Sanremo Festival 2022, the regulation of the new edition of Amadeus

Cosmo, Margherita Vicario and Ginevra (duet with The Representative of List). Sixties vibes with evergreen Be My Baby

Fiorella Mannoia (duet with Sangiovanni). The singer-songwriter returns to the stage to sing in two voices Hard-nosed by Pierangelo Bertoli

Francesca Michielin (duet with Emma). Finally together in the microphone station, the two artists will sing the success of Britney Spears Baby One More Time

Gianluca Grignani (duet with Irama). Irama will have the honor of singing the piece in two voices with her author My story between my fingers

Loredana Bertè (duet with Achille Lauro). A moment much awaited by fans, the two artists will sing the success of Bertè in two voices You are beautiful

Malika Ayane (duet with Matteo Romano). The young rookie chose the Elton John classic Your Song to duet with the extraordinary Malika Ayane

Mousse T (duet with Gianni Morandi). The two artists will perform a medley of hits in two voices

Mr.Rain (duet with Highsnob and Hu). The competing duo chose the song I have fallen in love with you by Luigi Tenco for an exciting moment paired with rapper Mr Rain

Nek (duet with Massimo Ranieri). The Neapolitan voice has chosen Anna will come by fellow countryman Pino Daniele for a musical moment with Nek

Rita Marcotulli (duet with Yuman). The composer and pianist will accompany the singer on the Frank Sinatra classic My Way

Rocco Hunt (duet with Ana Mena). The two beloved artists meet on the Ariston stage for a medley of successes to be sung with two voices

Pink Chemical (duet with Tananai). A much awaited moment for the public: Tananai pays homage to Raffaella Carrà with success You start making love

Sophie and the Giants (duet with The Vibrations). The Italian band chose Paul McCartney’s classic for the cover night Live and Let Die

Linen Pillow. Among the super guests of the fourth evening, Guanciale will be on stage with Amadeus to introduce his next roles in Rai fiction We And Survivors

Nuclear Tactical Penguins. Even the Bergamo band will be the protagonist of a musical moment to dance, live from the stage of the Tuscan Coast

There final on Saturday 5th February will see the presence of Orietta Berti and Fabio Rovazzi. The unprecedented duo will be the host of the stage on the Tuscan coast, as announced by Amadeus. The two are an official part of the cast of this edition