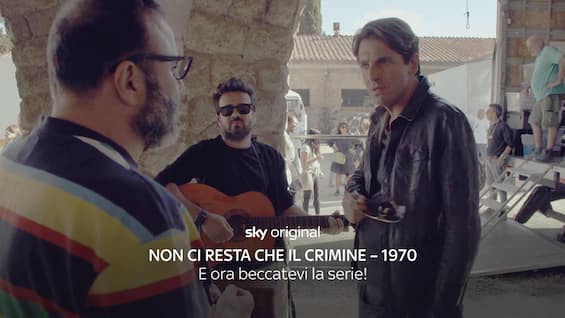 Sky announces a new original series from the successful trilogy by Massimiliano Bruno: produced by Sky Studios and by Federica and Paola Lucisano for Italian International Film), All We Have Left is Crime – 1970 will be the 6-episode sequel to the beloved time-travel saga that began with Crime We Don’t Remain and continued with Back to Crime And Once Upon a Time of Crime. Filming is underway in Rome and will continue until the end of the year. The Sky Original series will be available exclusively on Sky and streaming only on NOW in 2023.

From the Roman set comes the first, ironic backstage clip, with the protagonists of the film trilogy, Marco Giallini (Perfect Strangers, Tuta Blame Freud, Rocco Schiavone), Gian Marco Tognazzi (A Casa Tutti Bene, Poveri ma Richi, Speravo de Mori previously), Giampaolo Morelli (7 hours to make you fall in love, L’ispettore Coliandro, the saga I stop when I want) and Massimiliano Bruno – who is back behind the camera this time flanked by Alessio Maria Federici – back on set for filming the series TV. They are joined, among others, by Maurizio Lastrico (Call My Agent – ​​Italy, Io sono Mia, Latin America) in a completely new role.

All We Have Left is Crime – 1970 is written by Massimiliano Bruno, Andrea Bassi, Gianluca Bernardini, Herbert Simone Paragnani.

After the journey back in time to the 80s, in which the Banda della Magliana thrived in Rome, and then the one in fascist Italy of the 40s, the series will transport its ramshackle band of protagonists in the 70s, among the environments of the youthful left and those of the subversive right of the Borghese coup.

Giuseppe (Gian Marco Tognazzi), Moreno (Marco Giallini) and Claudio (Giampaolo Morelli) are reunited again, this time for an adventure in 1970. After discovering that he has been adopted, Giuseppe decides to look for his real mother, regardless of the warnings of their friend and scientist Gianfranco (Massimiliano Bruno): if you change the past, the present changes too. Giuseppe manages to meet his mother at a happening at the home of Duccio Casati (Maurizio Lastrico), a rich bourgeois with progressive ideas who has taken the cause of the students’ movement to heart. But the emotion that overwhelms Giuseppe in finding Linda causes him to make a serious mistake. By saving it from an attack, he ends up changing the past, and therefore also the present: now today’s Italy has become a fascist dictatorship, and it will be necessary to go back again to put things right… at the cost of infiltrating the Bourgeois coup!

Nils Hartmann, Executive Vice President Sky Studios for Italy and Germany, declared: «The success of “Non ci resta che il Crime” is the result of a very successful idea, which confirmed the great talent of Massimiliano Bruno and the extraordinary interpreters who immediately made their characters iconic. We are proud to announce today that this story continues, and it does so with a new Sky Studios project, which sees the return of all the protagonists of the films plus several interesting additions in front of and behind the camera, as well as in the screenplay. Six episodes that we are happy to make with Italian International Film, for a title that will make our now solid line-up of comedy genre productions shine even more».

Antonella d’Errico, Executive Vice President Programming Sky Italia, said: «Comedies have always been among the most loved content on our platform, among the most successful genres among our subscribers. The film trilogy produced by the Lucisano Group’s Italian International Film is an IP which, after the excellent results at the box office, was, not surprisingly, able to conquer a very large portion of our audience, amused by the irresistible chemistry between the protagonists of the saga and intrigued by the ploy of time travel, which historically has had so much success in the cinema and on TV. With “We just have crime – 1970” we therefore offer, in serial format, a new Italian comedy that we build on the backs of an already much appreciated story. We are happy to carve out a special place for this production in the roster of our original series ».

Paola Lucisano, Managing Director and Head of TV Production, Italian International Film (Lucisano Group), declared: «We immediately grasped the potential of the idea: time travel has always fascinated authors and viewers. This time the travelers – played by audience darlings – are a little unaware, a little roguish and crafty, a fantastic mix that has given us a lot of satisfaction in the three films. We can say that we have an attachment, an affection, for this trilogy, the result of creativity, imagination and craft, populated by good actors loved by the public and directed with passion by Massimiliano Bruno who is joined by Alessio Maria in directing this new TV adventure Frederiks. We just have to… wait for the series on Sky».